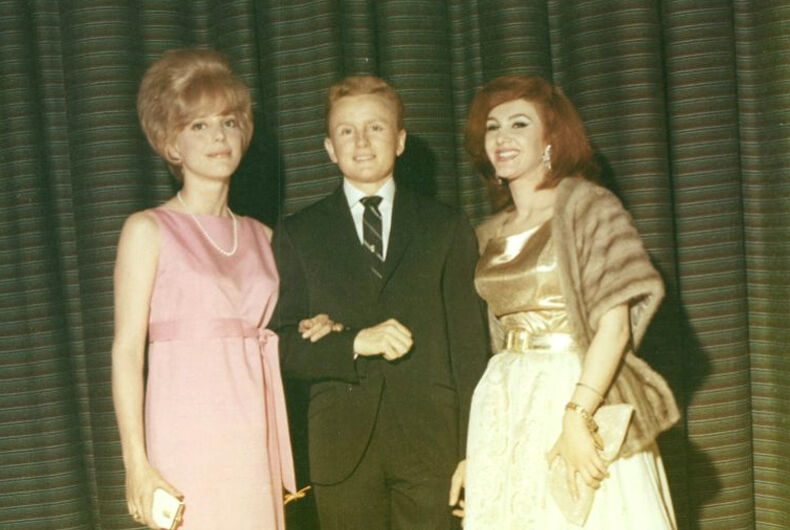 No LGBTQ History Month should pass without recognition of the unique, pivotal role in improving LGBTQ lives played by Reed Erickson.

Like many other social change movements, the history of the LGB and Trans movements is one of financial struggle to function and survive. More so than most other movements because of both their social disapproval and legal jeopardy aspects. For example, financial donations are sometimes anonymous, and, when requirements apply for the reporting to the state of the names of donors giving above a particular amount, some donors carefully give precisely less such as $99.99 rather than $100.

Related: This trans activist recently shared her memories of the Stonewall uprising and early life in NYC

Until the creation of the Human Rights Campaign Fund in 1980, there was little formal attention to fundraising, and the death of many a grassroots LGBTQ group can be attributed to other groups being better at raising money. A study a few years back showed that only a tiny fraction of the LGBTQ community contributes to any organization working on their behalf.

Reed Erickson was born on October 13, 1917, had a circle of publicly closeted lesbian friends while attending Philadelphia High School for Girls (where he later tried, unsuccessfully, to create a scholarship for lesbian students), and was still presenting as female while earning a degree in mechanical engineering in 1946.

Dr. Harry Benjamin’s legendary gender identity practice began with a trans woman in her early 20s referred to him by Dr. Alfred Kinsey in 1948. Christine Jorgensen became one of his patients following her return to the United States in 1952 after initial surgery in Denmark.

Some time before publication of Benjamin’s classic The Transsexual Phenomenon in 1966, Erickson, too, became a patient followed by surgery and a legal name change on his birth certificate, rare for the time.

He married the first of three women in 1963. His second wife had a daughter by artificial insemination and they adopted a boy. While each marriage eventually ended, his constant companion wherever he went was a leopard named Henry he’d raised from a cub.

During this time he’d already begun parlaying inherited wealth into millions more, particularly from investments in oil-rich real estate in Louisiana. In 1964, he founded the Erickson Educational Foundation (EEF) whose goals were “to provide assistance and support in areas where human potential was limited by adverse physical, mental or social conditions, or where the scope of research was too new, controversial or imaginative to receive traditionally oriented support.”

His work through EEF was crucial to improving the lives of countless trans people. In addition to funding many of the earliest research projects, his two main contributions were the financial support he gave to the Harry Benjamin Foundation and the first North American gender clinic at Johns Hopkins Hospital in Baltimore, Maryland.

Erickson funded international conferences on trans topics in 1969 (cosponsored by the Albany Trust of London), 1971, and 1973. Later conferences were organized by the Harry Benjamin International Gender Dysphoria Association (HBIGDA) founded in 1979. It changed its name to the World Professional Association for Transgender Health (WPATH) in 2007.

The Reed Erickson Collection in the Transgender Archives at the University of Victoria, Canada, contain many of EFF’s publications and other relevant materials.

A list of some of the other specific projects funded by Erickson from the article Reed Erickson and the Erickson Educational Foundation:

After learning about Los Angeles-based gay and lesbian rights group ONE, Inc., which published the highly influential ONE magazine, in 1964, Erickson began giving them money after convincing them to form the nonprofit, tax-exempt Institute for the Study of Human Resources.

With the huge amounts of money he gave them over the years that other gay groups at the time could barely dream of (some $1.5 million in today’s dollars), they published a two-volume Annotated Bibliography of Homosexuality and created a variety of unprecedented gay equality focused research and education programs including lectures, and, ultimately, accreditation in 1981 by the state of California as a graduate degree-granting institution.

But their long honeymoon ended in 1983 when Erickson – now addicted to ketamine and cocaine – decided, for some reason, not to give ONE ownership, as they claimed he had promised, of a million-dollar estate in which they’d moved.

The deeply bitter dispute did not end until 1992 when Erickson’s daughter agreed to divide the property in lieu of her father who had died months before in a hotel in Mexico where he’d fled to avoid prosecution on drug charges in the US and built a grand mansion. He was 74.

Neither the estrangement with ONE nor his tragic last years can erase how much today’s LGBTQ communities owe him.

Many thanks for the input from Erickson expert Prof. Aaron Devor of the Transgender Archives, University of Victoria, Canada, which include Erickson personal papers, business records, legal files, and art works.

Over 1/3 of straight voters don’t want LGBTQ elected officials. But queer voters do.