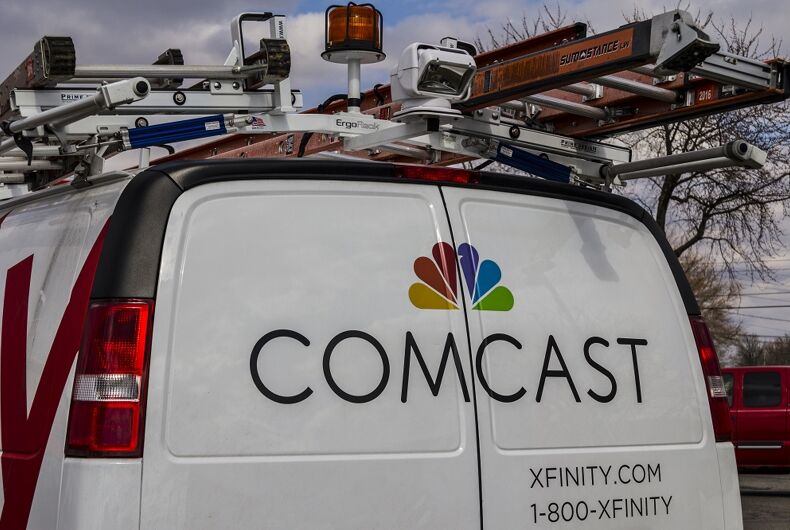 A vice president at Comcast Cable filed a federal lawsuit against his employer claiming that the corporation discriminated against him for the past 18 years.

Klayton Fennell was promoted to Senior Vice President/Government Affairs in 2015 and was Comcast’s lead contact on LGBTQ issues.

Related: Hey, Rex Tillerson, your company is being sued for antigay discrimination

But while he was publicly responsible for making Comcast seem pro-LGBTQ, Fennell’s now saying that he was harassed, denied promotions or equal pay, and encouraged to leave corporate headquarters in Philadelphia because he’s gay.

In Fennell’s lawsuit, he says that the harassment started right away when he began working at the corporation in 2001 and his boss tried to keep him out of sight from her superiors.

He was made to visit an “executive coach” who told him he was “too gay and flamboyant” for the company and encouraged him to find another job considering Comcast’s “conservative culture.” In 2005, he alleges being called a “faggot” at a meeting multiple times by another employee, to which Comcast allegedly took no action.

Fennell rose the ranks, but more slowly than if he were straight. He said that on multiple occasions one of his less-qualified straight colleagues was picked for a promotion over him. He was even told once that he couldn’t be promoted because he wasn’t a “cultural fit” for the new office he would work in.

After being passed over for several promotions and even getting demoted, he was told to take another demotion and go work at the company’s San Francisco office where it was more “acceptable” to be gay.

Eventually he was promoted to senior vice president, but despite his longer tenure, he was the lowest paid of his peers in his position and department, and the only one not getting a bonus. When he complained about the pay discrepancy, he was told by a human relations manager that his straight colleagues saw him as “high pitched.”

But around this time, Comcast decided that Fennell’s sexuality was an asset. They started touting him as a contact on LGBTQ issues, and he had to promote the company’s 100% rating on HRC’s “Best Places to Work” list.

Fennell still faced discrimination in his workplace though. In 2016, Fennell says that Comcast’s communications officer D’Arcy Rudnay “announced to all in attendance” of a high-level meeting that Fennell reminded her of gay skater Johnny Weir. In 2018, he claims made a complaint with the Philadelphia Commission on Human Relations. After that, the harassment intensified – Fennell was excluded from meetings, his workload was increased because Comcast refused to fill a position that reported to him, and he was put under investigation by the company.

In September 2019, they concluded from their investigation that he needed coaching for his management style and he was facing termination. He believes that they made that up so that they could fire him. Since his health took a turn for the worse with all this stress, Fennell took medical leave before he filed this lawsuit.

“At no time during Klay Fennell’s long career at Comcast has he been discriminated against or been the subject of wrongful treatment,” Comcast said in a statement.

“Comcast has a longstanding commitment to the LGBTQ community and has been widely recognized for its inclusive culture.”

Pennsylvania does not explicitly ban discrimination on the basis of sexual orientation and gender identity, but in 2018 the state’s Human Relations Commission determined that the state’s ban on sex discrimination protected LGBTQ people as well.

The ‘Imitation’ Alan Turing vs. the real Alan Turing: Victim vs. hero