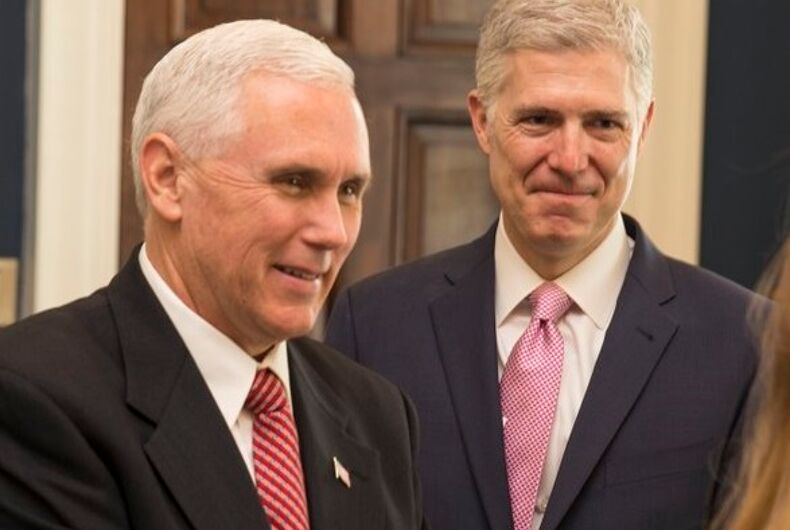 The oral arguments in the Harris, Zarda, and Bostock cases have come and gone.  In their wake?  Much dread and, from some, a small amount of optimism.

More about that optimism later.

Now is the time for dread. Not over what the Supreme Court might do but over what might happen in the Major League Baseball playoffs.

The dread that your team will do what the Los Angeles Dodgers did one day and three time zones removed from the aforementioned Supreme Court arguments.

In my neighborhood in far western Illinois, fireworks abounded in 2016 when the Chicago Cubs won the World Series 108 years after last doing so; not so much the following year when the team I followed while growing up, the Houston Astros, did so for the first time ever.

Hatred for what Texas has become aside, the kid in me who grew up in Houston did cheer.

In October, 1980, the Astros made the postseason for the first time.

Eleventh grade was not an otherwise idyllic time for a nerd who was trying to hide so much about herself from so many.  And yet I can sometimes put those bad memories aside to remember that the time did hold some promise.

Ronald Reagan had not yet been elected president.

And the Astros had not yet blown a two-games-to-one lead to the Philadelphia Phillies in the best-of-five National League Championship Series.

I like the TV series Bones but I’m less than thrilled whenever David Boreanaz’s character mentions his fond memories of attending the 1980 World Series with his father and watching their Philadelphia Phillies win it.

I also was less than thrilled that I didn’t get to attend any of the playoff games between those Phillies and my Astros; my father’s work schedule intervened.  More bad memories, but on the upside, we did get to several Oilers games later in the year.  So, it balanced out.

Plus, I had gotten to attend a regular season game between the Astros and the Phillies during the summer.

I got to the Astrodome far enough before game time that few players were even out on the field for warm-ups. But, down at the home plate end of the Philadelphia dugout was a player that more than a few folks wanted to hound for an autograph: Pete Rose.

I didn’t like Pete Rose.  And it was for the same mature reason that I didn’t like so many other players: he was damn good but he didn’t play for my team.  How dare he?

But my allegiances were malleable.   I didn’t like Joe Morgan when he was Rose’s teammate at Cincinnati – but after Rose left the Reds for the Phillies in 1979, Morgan left for the Astros.  And all was well…

Until Morgan left for the Giants in 1981.

I didn’t like Pete Rose, but that didn’t stop me from having a few of his baseball cards. And when I got to the front of the line that summer day, I asked him to sign one.

And then all was not well.

Was he just being a jerk?  Or was he implying that he would sign anything else?

It turned out to be the latter.  He signed my program book.

Based on my one personal interaction with the man, I concluded that Pete Rose was a gruff but otherwise honest man.

I’ll pause here to let the laughter subside, and while it is subsiding, let’s return to the present, to October, 2019, to the Harris, Zarda, and Bostock cases and to the wee bit of optimism that has been expressed following the oral arguments.

That optimism has been focused not on Chief Justice John Roberts, known for being something of a voice of moderation on a partisan court (think back to the Obamacare case in 2012), but on Justice Neil Gorsuch – the man who occupies the Merrick Garland Seat.

Some have viewed Gorsuch’s line of textualism-centric questioning as an indication that his vote might be in favor of trans woman Aimee Stephens.

All we know for sure is that it constituted one moment on one Tuesday in October.

If the end result is 4-1-4 in favor of Aimee Stephens with a narrow, positive interpretation of Title VII being the 1, I’ll cheer like I did when it looked as though the Astros had turned a triple play in Game 4 back in 1980.

But no one should get their hopes up for a truly pro-trans Neil Gorsuch until evidence thereof is followed by the phrase, “It is so ordered.”