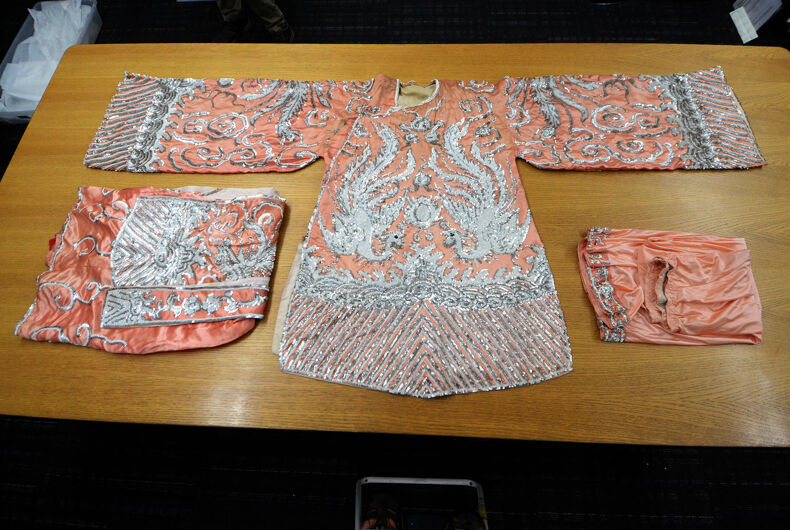 One of Sylvester's performance costumes is part of the collections at the GLBT Historical Society.Photo: Rick Gerharter

Curators working with the Oakland Museum of California on its first major LGBT exhibition, dubbed “Queer California: Untold Stories,” displayed a blue sequined jacket created by San Francisco designer Pat Campano and worn in 1985 by the gender-bending gay disco diva Sylvester. The garment, on loan from the San Francisco-based GLBT Historical Society, provided a bit of glam and visual whimsy to the show, which closed in August.

The coat is one of a number of costumes, antique gloves, jewelry, and personal items that once belonged to the “Queen of Disco” now housed in the society’s archives. The Sylvester collection, in museum-speak, measures more than eight linear feet.

Among the items is a black-and-white blazer also by Campano, whose other design clients have included the Supremes. One outfit, donated to the society in 1991 (three years after Sylvester’s death at the age of 41 due to AIDS complications), is a peach-and-silver-sequined ensemble that includes a top and jacket adhered via Velcro strips and snaps. It features an Asian-inspired design with a white phoenix made out of sequins.

“Unlike a lot of designer pieces, these are performance pieces. You can see the sweat stains. This came in like this,” said Kelsi Evans, director of the society’s Dr. John P. De Cecco Archives & Special Collections, as she showed off the intricately made costume.

Society staff last year visited the home of Bernadette Hurd, one of Sylvester’s younger sisters, to gain access from her estate a number of her famous sibling’s outfits to add to the archival group’s collection. The pieces selected represent the fine craftsmanship that went into creating the outfits for the iconic performer, who famously corrected the late comedian and television host Joan Rivers that he wasn’t a drag queen, but simply “Sylvester.”

“The detail of the work such as with the sequins, people don’t bother with this kind of stuff anymore,” said GLBT Historical Society Executive Director Terry Beswick. “It’s not just an artifact that was sewn and used once. It was worn many times.”

Yet to be shown publicly

Much of the society’s Sylvester holdings have yet to be shown publicly. As it works toward one day erecting a permanent museum in San Francisco far larger than the jewel-box exhibit space it currently operates out of (a leased storefront in the heart of the city’s Castro LGBTQ Cultural District), society staff envision one day being able to properly tell Sylvester’s story in a multi-faceted way.

“I can see an entire gallery dedicated to Sylvester,” said Beswick, “and not just about Sylvester but contextualizing his time and era.”

The Los Angeles native, who was born Sylvester James Jr. in the city’s Watts neighborhood, grew up in a large, middle-class African American family. He headed north to San Francisco in 1972 and soon fell in with the celebrated genderfuck performance troupe The Cockettes.

A year later, Sylvester launched his recording career. His biggest hit came in 1979 with the release of “You Make Me Feel (Mighty Real).” Last October, NPR declared it a national anthem, noting that the LGBT community in particular has embraced the song due to its lyrics openly celebrating liberation. The song was also one of the 25 American recordings inducted into the Library of Congress earlier this year.

Sylvester bequeathed the royalties from his music to the benefit of AIDS charities in San Francisco, but it wasn’t until 2010 that two local nonprofits selected by the executors of his will saw any money because the $350,000 in advances the singer had accrued needed to be paid off, along with a number of other legal issues that had to be ironed out.

Scarce video recordings of Sylvester performing his music are part of the archival group’s holdings, which also includes his personal memorabilia, photographs, and posters. The variety of objects preserved in the society’s Sylvester collection provides curators an opportunity to create a compelling installation about the performer.

“It could be a multi-medium type of display, which is very compelling to visitors,” Evans noted. “We have a lot of textiles we preserve because they tell a story in a way that paper artifacts wouldn’t tell.”

Fabrics of our lives

Costumes and garments not only add tactile, visual elements to historical exhibitions, the clothing is also a draw for museum attendees. One of the society’s most revered articles of clothing in its collection is the suit the late gay Supervisor Harvey Milk was wearing the day he was assassinated in 1978.

Then there are the garments that evoke more joyous occasions, like the wedding dresses donated to the historical society by Emily Drennen and Lindasusan Ulrich, bisexual activists who have been together nearly 22 years and exchanged wedding vows three times over the span of five years.

Their first marriage was a private affair in 2003, followed by a public ceremony in 2004 during the “Winter of Love” in San Francisco when local officials defied state law to perform same-sex weddings. The state’s supreme court annulled those marriages, so the women married a third time in 2008 following a legal ruling that California could wed same-sex couples. (The decision was overturned that November by the passage of the ballot measure Proposition 8, though the marriages performed remained valid. Prop 8 was eventually struck down by the federal courts, leading to the resumption of same-sex weddings in the Golden State in the summer of 2013.)

Drennen and Ulrich, who moved to Ann Arbor, Michigan in 2015, wore their wedding dresses on at least eight occasions, including at Pride parades and marriage equality protests, documented in photos that ran in the press. They were also decked out in the white garments for an “unVEILing injustice” action protesting LGBT leaders’ usage of language that erased bisexual people out of the marriage equality movement.

The couple had bought the gowns embroidered with floral patterns and lined in toile off eBay, with Drennen’s costing $250 and Ulrich’s $79. Because the dresses had morphed from being bridal wear into activist garb, the women never had them dry cleaned, preferring instead to preserve the stained fabric and dirty hems for posterity.

It was how the pair of dresses was displayed during the special exhibit “Biconic Flashpoints: Four Decades of Bay Area Bisexual Politics” that opened in May 2014 at the historical society’s Castro museum space. The women co-curated the yearlong show with fellow bisexual leaders Lani Ka’ahumanu and Martin Rawlings-Fein.

“There was something about them; they took on more meaning than just one couple’s wedding dresses. And I think, especially because of the fact we ended up being so visible as two women who are bisexual, it brought a lot of visibility to a population that tends to be very invisible,” said Ulrich.

Drennen, who was arrested in her dress for blocking a city street near San Francisco City Hall during one marriage protest, said over time the meaning imbued in their dresses changed.

“They became activism wear,” she said.

Because the garments weren’t worn solely for a few hours on their wedding day and then cleaned and boxed up, the women came to think of them as “working dresses. “They did duty beyond just a party and a ritual,” said Ulrich.

The gowns struck a chord with attendees at the opening of the special exhibit, who either took photos of Drennen and Ulrich standing beside their dresses or asked to have their photo taken with the women and their garments.

“A lot of people were delighted to see them,” recalled Ulrich.

The couple looks forward to the day where they can return to San Francisco, which they called home for two decades, and see their wedding dresses as part of a marriage equality exhibit in the historical society’s future museum.

“It would be pretty awesome to see my wedding dress is in the museum,” said Drennen. “We didn’t need the dresses, so this is a way to contribute to history by donating them.”

Their dresses, added Ulrich, are a visual reminder that bisexual people stood alongside their gay, bisexual, and transgender brethren fighting for marriage rights from the very beginning.

“We were there throughout the whole thing, even though we were so often left out,” she said. “Our dresses are our way of saying don’t erase us. We were there and we got the dirt on our hems to prove it.”