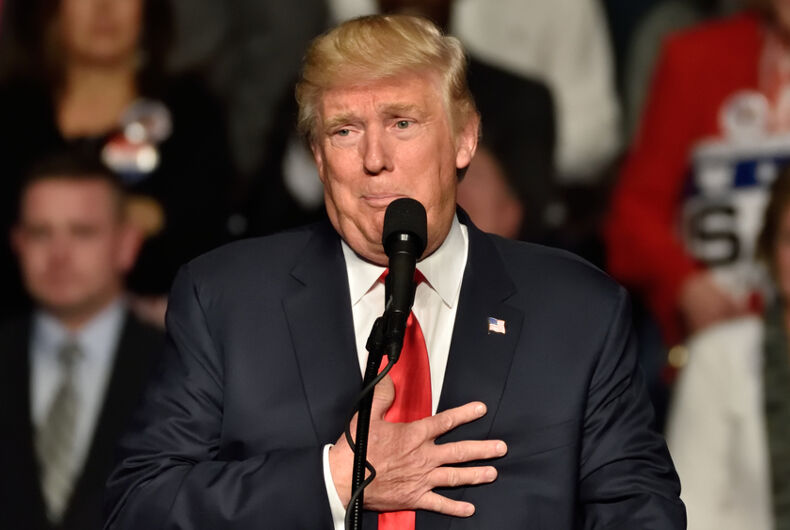 A resolution to formally open an impeachment inquiry against Donald Trump passed the House today on a largely party-line vote.

The eight-page resolution lays out the process for the impeachment hearings that will investigate claims that Trump attempted to get a foreign government to help him when he allegedly pressured Ukraine’s new government to dig up dirt on 2020 Democratic primary hopeful Joe Biden’s family by withholding $400 million in military aid.

Related: Nancy Pelosi opened an impeachment inquiry of Donald Trump. LGBTQ politicians are backing her up.

The resolution passed on a 231-196 vote. All but two Democrats voted in favor of the resolution – along with the House’s only independent – and all Republicans voted against it. One Democrat and three Republicans abstained.

All eight LGBTQ members of the House of Representatives voted for the resolution. Rep. Katie Hill (D-CA) resigned but is still in office until tomorrow.

Out Rep. Mark Pocan (D-WI) told LGBTQ Nation that the resolution – which is not constitutionally required even though Republican House members demanded it for weeks – should “quell these baseless complaints.”

“At every step of the way, Democrats have been transparent about their process and given Republicans equal access to question witnesses and be a part of these procedures,” Pocan said. “It is clear that Republicans are concerned with the actions of this president, and instead of follow their conscience, they are forced to make up complaints about process.”

“To quell these baseless complaints, Democrats introduced and passed a resolution today ensuring that all members of the House understand the impeachment inquiry process. I hope now, Republicans can take a moment to look at the facts being presented to them and put their duty to this country and the Constitution above their blind allegiance to this president,” he added.

“Today’s vote was a solemn one – a necessary one,” said out Rep. Mark Takano (D-CA) in a statement. “President Trump engaged in a quid pro quo by withholding military aid to pressure a foreign country to interfere in the 2020 election.”

“Our job is big, and we cannot shrink from holding this president accountable. I have an obligation to the U.S. Constitution I swore an oath to protect.”

“Up until now we have used the rulebook laid out by our Republican colleagues in a previous Congress,” said out Rep. Sean Patrick Maloney (D-NY) in a statement. “Sadly, the actions of the President – both his dealings with Ukraine and subsequent obstruction – necessitate an expanded roadmap for what comes next.”

“Every American, including the President, deserves a fair process. But we will not preserve our democratic system, if he is above it.”

During the vote, Trump tweeted, “The Greatest Witch Hunt In American History!”

The resolution moves the investigation to its next phase, ending closed-door depositions and opening up nationally broadcast hearings. The House Intelligence Committee is directed to hold the hearings and produce a report which will be handed off to the House Judiciary Committee to draft articles of impeachment.

Amy Klobuchar tried to give an anti-LGBTQ Pentecostal group $500,000 in taxpayer funds