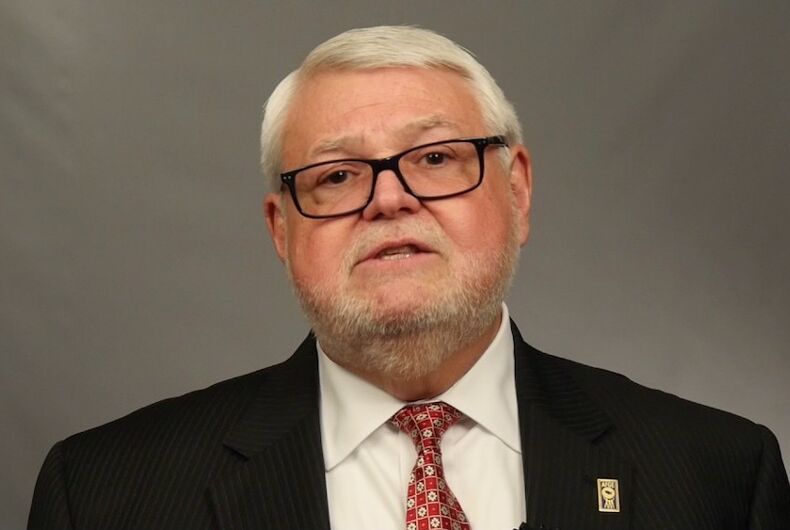 J. David Cox, national president of the American Federation of Government Employees (AFGE) — the largest U.S. federal employee union which “represents 700,000 workers at dozens of federal and District of Columbia government agencies” — has been accused of sexual harassment by 10 men and women.

Cox denies the allegations and will take a leave of absence while investigators look into the allegations. Cox isn’t publicly out as either gay or bisexual.

Among the allegations, Cox’s former secretary Rocky Kabir says Cox “urged him to shower with him, told him he should be more open-minded about trying sex with men, and frequently touched or reached for Kabir’s face,”  according to Bloomberg‘s Josh Eidelson.

“He also allegedly asked male staffers whether they shaved their crotches,” writes Eidelson, and “suggested that being photographed with his arms around two female staffers was a turn-on…. Employees would warn each other to be wary of Cox late at night or when alcohol or hotel rooms were involved.”

Although the union has a “robust anti-discrimination and anti-harassment policy,” Cox’s accusers say that they were either ignored by leadership or feared speaking out for worry of retaliation or hurting the union’s reputation.

Jerame Davis, Executive Director of the LGBTQ union member organization Pride at Work, told LGBTQ Nation, “These are incredibly serious allegations that must be investigated thoroughly. AFGE is one of our strongest partners in promoting and ensuring equality for LGBTQ working people and we are certain the union will take every measure to ensure a fair investigation and appropriate outcome.”

Cox is a 68-year-old man who was first elected as president of the AFGE in 2012 and has since been twice re-elected into the position. He once served within the U.S. Department of Veterans Affairs and was a member of the AFL-CIO Executive Council. President Barack Obama appointed Cox to serve on the Federal Salary Council and the Federal Prevailing Wage Council during his administration.