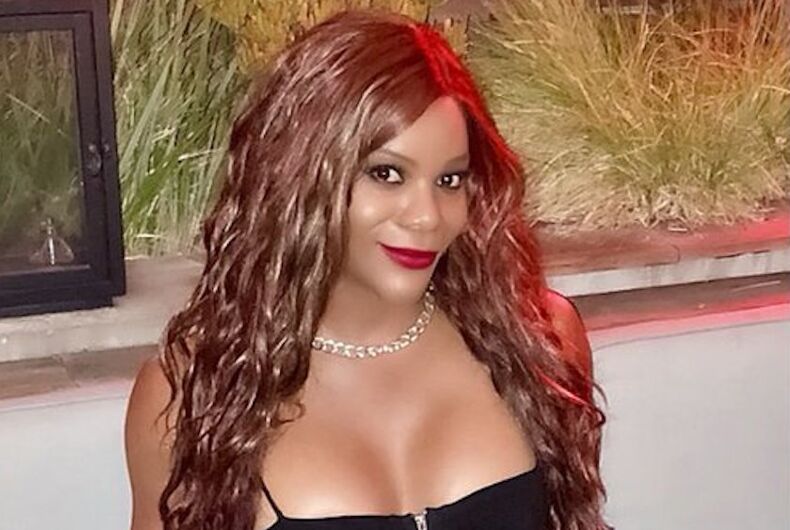 If you watched the CNN/HRC LGBTQ Town Hall, you might’ve seen trans activist Blossom C. Brown standing up, grabbing the mic and protesting the lack of black trans women asking questions at the forum— at one point she even spoke directly to moderator and gay CNN anchor Don Lemon before directly speaking to the audience.

LGBTQ Nation spoke with Brown on the phone to ask what compelled her to unexpectedly speak out, her take on the community’s complicity in erasing trans people of color from political discussions and her challenge to the candidates to attend a town hall focused exclusively on trans issues.

Brown works as an actress, producer and activist. She appeared in season one of the trans reality show I Am Cait and focuses her social justice work on HIV education and improving PrEP access through her work with the Human Rights Campaign and a Los Angeles-based non-profit. She also once discussed her experiences of anti-trans discrimination on Ellen.

Brown says that when the LGBTQ Town Hall introduced Beto O’Rourke as the sixth candidate to take questions at the event, she felt “furious because not one black trans person had taken the mic to ask a question.”

“At the same time,” she says, “I was also on social media, and I saw a lot of my black trans brothers and sisters … the hurt and the pain that they were posting about. And I saw that my sisters Ashley Marie Preston was actually snubbed from this CNN event, her question got snubbed, so it made her pull out from the entire thing altogether.”

I’m pulling out of the lgbtq presidential town hall tonight. I was part of the program & CNN scrapped my participation last minute. I was going to bring attention to the terror TSA inflicts on trans & non-binary bodies while traveling. I’d rather be absent than present & silent.

Brown continues, “I was thinking to myself, ‘This is an LGBTQ space and yet there’s not room for black trans people.’ Yes, we’re in the room and we’re there, and people are getting up and saying things about our narrative and what we go through, which we appreciate, but the problem was we were in the room and we weren’t able to tell our own story.'”

When a woman named Lizette Trujillo — a woman who has worked with the HRC and who is also the mother of a trans child — took the mic and made a comment validating the three trans activists from the Translatina Coalition —Bamby Salcedo, Maria, and Michaé — who protested earlier during Pete Buttigieg’s segment by waving a trans flag and declaring “Trans Lives Matter,” Brown decided to stand up and speak out.

“It’s not fair for black trans people to be erased from a so-called safe LGBTQ space,” Brown tells LGBTQ Nation.

How the gay community helps erase trans people, even in an LGBTQ town hall

Browns says there were a lot of emotions running through her when she got the mic.

“The only thing I was thinking about is the black trans women who are being killed this year and how the silence is real,” she says. “The transwomen that were murdered have the same intersectionality of being Black and Trans like me. A lot of those girls are from the south, I was born and raised in Mississippi. So it hit me a lot personally, and it’s so frustrating that when I see other people along the LGBTQ spectrum being so silent.”

She continues, “That’s what’s devastating to me because the thing was when we talk about gay marriage and marriage equality, we were expected as trans people to go and support that, and we did. But when our issues are on the line — like our rights, like not being able to serve in the military, not being able to use the restroom that we most desire to — we’re seeing those same people that we supported not supporting us… it’s just really crazy to me.”

After she spoke on the mic for a bit, Lemon asked for the microphone back. He told Brown, “Let me tell you something. The reason that we are here is to validate people like you. That is why we are here.”

“No you’re not!” Brown tells LGBTQ Nation. “Six people have gone by not one black trans person has taken the mic. I’m black. I’m trans. That’s what people like me look like. And that’s what I find so problematic with Don… It was really really disappointing to hear that from my black gay brother saying that.”

Blossom Brown, a black trans woman, interrupts a question to BetoO’Rourke at the CNN #LGBTQTownHall:

Although some audience members applauded Brown’s speech, she says she half the room remained silent, and that surprised her.

Brown’s hopes for a town hall focused on trans issues

She says she’s issuing a challenge to every presidential candidate to come and hear trans issues — not just from black trans people but from Latinx, Asian and Native American ones, including gender “non-conforming, non-binary and other people.

“Whatever that looks like, however you identify,” Brown says, “you should be at this table talking about your issues to these candidates”

She says Beto O’Rourke actually tweeted to her, “We’re gonna try to make a town hall for trans women of color,” and Brown says she responded, “I appreciate it, but I wanna see action only.”

So this amazing powerful woman is who gave me the mic last night. Her name is Lizette Trujillo and she is the mother of a Transgender son. She’s the real unspoken She-Ro of last night! She’s a member of @HRC Parents for Transgender Equality Council! Thank you for that moment! pic.twitter.com/JCBOyLhSBV

Brown tells LGBTQ Nation, “If we do get this town hall, it will show who really supports the trans community and who doesn’t. Like, I have plenty of faith in Elizabeth Warren, Pete Buttigieg and now Beto O’Rourke, but I wanna know: Will some of these other candidates show up and really show their same support for us? Or were you just there (at CNN’s LGBTQ Town Hall) to be a prop for us?”

“Our voices matter too…. We sit on the shoulders of Marsha P. Johnson and Sylvia Rivera. Our trancestors were the first ones who threw that brick at Stonewall. We have the power. We have access but because of the ‘isms’ — such as racism, sexism, classism — of course, white privilege gets put to the top. So of course, gay white cis men will get all the rewards and then whatever’s left over will go to trans people like me: It’s like that in the health field, it’s like that being a teacher, being a lawyer, that’s just how society is. White supremacy is very very real and it makes a lot of us complicit to it… But you know, I always say that we have the power and we do belong and you know what, we have to fight them for our place at the table. We deserve it.”