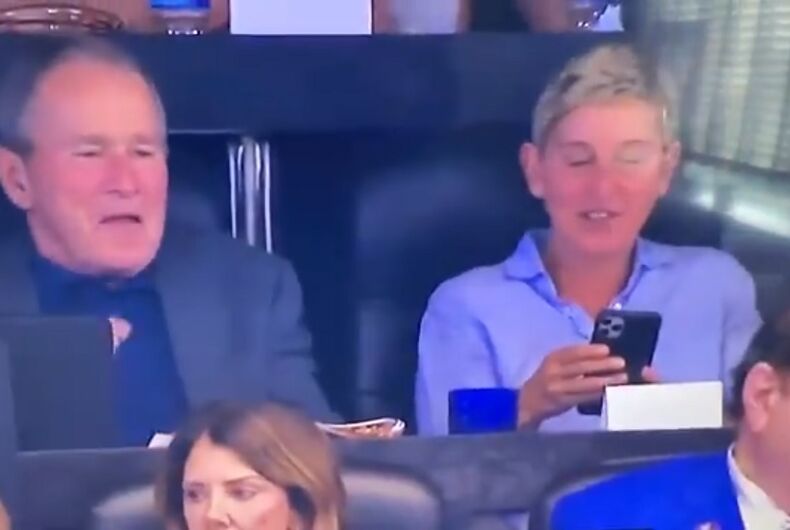 An activist on Twitter is accusing Ellen Degeneres’s team of removing a video he made that criticizes her friendship with former president George W. Bush.

Over the weekend, Ellen was spotted getting along famously with Bush at a Dallas Cowboys game. She was criticized online for that friendship, both because of Bush’s war in Iraq, which resulted in hundreds of thousands of deaths, and his support for a constitutional amendment to ban marriage equality, which would have banned Ellen from marrying her wife, Portia de Rossi.

Related: Ellen is getting sued by a street artist for copyright infringement. He has a good case.

On Tuesday’s Ellen Degeneres Show, she responded to the criticism with a speech about “kindness.”

Activist Rafael Shimunov made a remix of that segment from the show, juxtaposing horrific pictures from the Iraq War with Ellen’s speech about being “kind to everyone.”

His message is that Ellen’s “kindness” is more worried about politeness toward other elites than it is with violence against people who can’t really defend themselves.

The video has been removed from Twitter and replaced with a message that said that the copyright holder filed a report.

Shimunov said that he believes his video is protected by the fair use doctrine as satire, which allows some copyrighted works to be used without the copyright holder’s permission.

Twitter’s guidelines state that people who make false copyright claims may be liable for attorney’s fees and damages if their claim gets challenged.