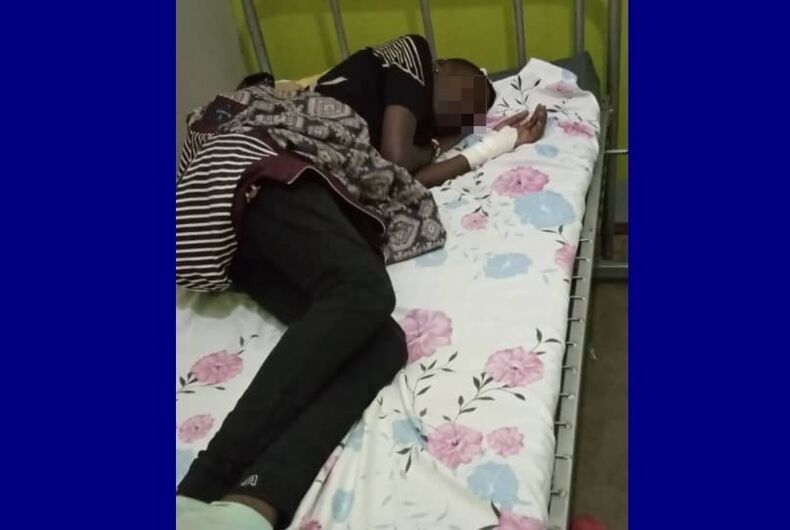 The victim on a hospital bedPhoto: Campus Liberty Uganda

A woman in Uganda was attacked by a doctor when he found out she was a lesbian, a human rights group reports.

According to the African Human Rights Media Network (AHRMN), a woman in Uganda’s capital Kampala says that she was severely beaten by a man she only knows as Dr. Mukwaya who runs Mukwaya General Hospital in the trendy neighborhood of Kabalagala.

The woman, whose name has not been released, said she didn’t have enough money to get glasses at the nearby Eye Care Centre, so a friend told her to go to Dr. Mukwaya’s clinic. When she told this story to the doctor, he asked her who her friend was.

She responded with the name of Mukwaya’s daughter, who is a nurse at the clinic. The daughter also happens to be a lesbian, and Mukwaya assumed that the victim was the daughter’s lover.

Mukwaya was “infuriated and angered,” reports AHRMN, and he ordered a security guard to get him an iron bar, which he allegedly used to beat the victim’s head, arms, legs, and back.

According to the Kabalagala Police Station, the victim’s skull was cracked open during the attack and she had “tenderness” on her arms and legs. One of her shoulders was dislocated as well.

The victim’s phone was also broken during the attack.

Uganda Minister of Health Dr. Ruth Aceng said she was “shocked by the events at the hospital.”

“Lesbians interact with the general population,” she said, offering to connect the victim with a neurosurgeon at a hospital.

AHRMN tried to contact Mukwaya, but one of his employees at the clinic said that he left the city.

While Uganda’s Constitutional Court overturned the Kill the Gays bill in 2014 on procedural grounds, local activists have noted that the bill has led to increased violence against LGBTQ people in the country.