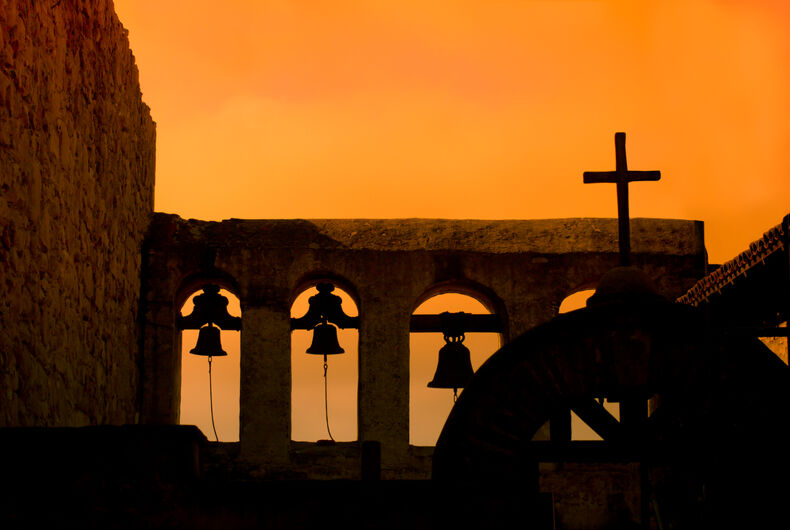 The second Monday of October each year was designated in 1937 nationally as Columbus Day.

From its very inception, the holiday and Christopher Columbus have been challenged by historians and civil rights advocates. They argue the immorality of the historical revisionism of Columbus – who unleashed widespread violence, human enslavement, and murder – to the status of a national hero.

More recently, several states and local municipalities have re-designated the day as Indigenous Peoples’ Day to honor the traditions and accomplishments of the original peoples in the lands known today as “the Americas” – acknowledging the genocidal slaughter perpetrated by European colonialists under the guise of “civilization” justified by a Christian God.

Europeans on both American continents established their domination based on a program of exploitation, violence, kidnapping, land theft, and genocide – and religion was a deciding motivation.

For example, the Puritans left England for the Americas to practice a “purer” form of Protestant Christianity.

They believed they were divinely chosen to form “a biblical commonwealth” with no separation between religion and government. They tolerated no other faiths or interpretations of divine precepts. In fact, they murdered and expelled Quakers, Catholics, and others.

[N]o negroes, mulattos or Indians, Jew, Moor, Mahometan [Muslims], or other infidel, or such as are declared slaves by this act, shall, notwithstanding, purchase any christian (sic) white servant….

In 1790, the newly constituted United States Congress passed the Naturalization Act, which excluded all nonwhites from citizenship, including Asians, enslaved Africans, and Native Americans (the later whom they defined in oxymoronic terms as “domestic foreigners,” even though they had inhabited this land for thousands of years).

The cultural genocide can be seen in the case of Christian European American domination over indigenous peoples, whom European Americans viewed as “uncivilized,” “godless heathens,” “barbarians,” and “devil worshipers.”

White Christian European Americans attempted to destroy indigenous peoples’ cultures through confiscation of land, forced relocation, forced conversion to Christianity, and the establishment of Christian day schools and off-reservation boarding schools far away from their people.

The first off-reservation Indian boarding school was established in Carlisle, Pennsylvania in 1879 and run primarily by white Christian teachers. At the school, Indian children were stripped of their culture: the males’ hair was cut short, they were forced to wear Western-style clothing, they were prohibited from conversing in their native languages, all their cultural and spiritual symbols were destroyed, and Christianity was imposed.

“Civilizing” Indians became a euphemism for Christian conversion. Christian missionaries throughout the United States worked vigorously to convert Indians. A mid-19th century missionary wrote: “As tribes and nationals the Indians must perish and live only as men, [and should] fall in with Christian civilization that is destined to cover the earth.”

The expansion of the republic and movement west was in part justified by a philosophical underpinning since the American Revolution. Called “Manifest Destiny,” it was based on the belief that the Protestant Christian God intended the United States to extend its holdings and its power across the wide continent of North America over the native Indian tribes from the east coast to the west.

During the early years of the new republic, with its increasing population and desire for land, political leaders, such as George Washington and Thomas Jefferson, advocated that Indian lands should be obtained through treaties and purchase.

President Jefferson in 1803 wrote a letter to then Tennessee political leader, Andrew Jackson, advising him to convince Indians to sell their “useless” forests to the U.S. government and become farmers. Jefferson and other government leaders overlooked the fact that this style of individualized farming was contrary to Indian communitarian spiritual/cultural traditions.

Later, however, when he inhabited the White House, Jackson argued that white “settlers” had a right to confiscate Indian land. Though he proposed a combination of treaties and an exchange or trade of land, he maintained that whites had a right to claim any Indian lands that were not under cultivation. Essentially, Jackson recognized as the only legitimate claims for Indian lands those on which they grew crops or made other “improvements.”

The Indian Removal Act of May 28, 1830 authorized President Jackson to confiscate Indian land east of the Mississippi River, “relocate” its former inhabitants, and exchange their former land with territory west of the River. The infamous Trail of Tears attests to the forced evacuation and redeployment of entire Indian nations in which many died of cholera, exposure to the elements, contaminated food, and other environmental hazards.

Throughout the centuries, the United States government has broken numerous treaties it had forced onto indigenous peoples. European American can never reverse the damage perpetrated upon these noble peoples.

But we can begin, at least, by dumping Christopher Columbus into his rightful place of historical infamy, and commemorate Indigenous Peoples’ Day.