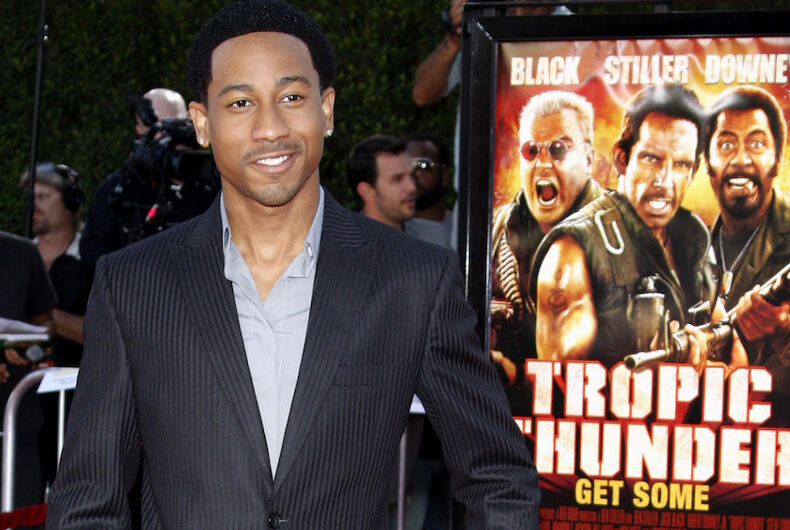 Brandon T. Jackson, known for acting in Tropic Thunder and the Percy Jackson franchise, is now claiming his career is on a downward spiral as a punishment from God for playing a gay character and wearing a dress on screen.

In a video talk with TMZ Live, Jackson talks about taking the role of closeted rapper Alpa Chino in 2008’s Tropic Thunder as leaving him “on thin ice… with the Father.” He also talked to Comedy Hype to explain how putting on a dress alongside Martin Lawrence in Big Momma’s House: Like Father, Like Son has ‘cursed’ him.

Related: Marie Osmond says sexual abuse made her think she might be gay

Jackson, who is a Black Hebrew Israelite, claims that God had “mercy” and “grace” following these roles, and made his career suffer to punish him for breaking the commandments of the Torah. Jackson believes his religious doctrine prohibits men from wearing feminine clothing (citing Deuteronomy 22:5) or condoning homosexuality.

In regards to Big Momma’s House, Jackson says the movie “wasn’t that good” to him and that “Everything went wrong when I put on that dress… My personal life was in shambles at that time. It was horrible.”

He admits though that other people in Hollywood who play gay characters or who wear dresses as men are not punished by God for ‘breaking’ these rules. He claims he’s different because he’s a devout Israelite, and that means he has to follow the religion’s rules more stringently.

“It may work for Tyler Perry…It didn’t work for me,” he says to TMZ.

Jackson hasn’t appeared to lose out on many gigs since 2011’s Big Momma’s House either. He’s played regularly or recurring roles on TV shows BoJack Horseman, Californication, Deadbeat, Mr. Robinson, and most recently guest starred as Barack Obama on an episode of Historical Roasts. He also appeared in the films Hail Mary, Thunderstruck, Beverly Hills Cop, and the aforementioned Percy Jackson blockbuster films as well.

The L Word: Generation Q trailer only makes us more anxious for its return