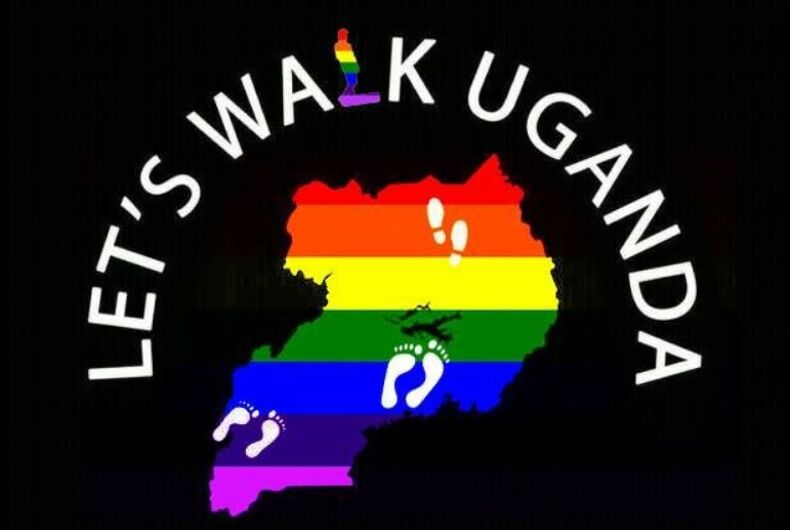 Uganda has stepped up its repression of LGBTQ people and reportedly arrested 16 activists on charges related to gay sex.

The sixteen men ages 22 to 35 were arrested this past Monday at the office of a sexual health organization – Let’s Walk Uganda, where they lived and worked.

“Based on the medical examination report, it was established that the suspects were involved in sexual acts punishable under the penal code,” said a spokesperson for Kampala Police.

Charges reportedly include carnal knowledge against the order of nature and trafficking in persons. The men have been released on bond.

One person who works for Let’s Walk Uganda told LGBTQ Nation that the arrests were preceded by a mob attack on their office.

The staff member said that a mob gathered in the evening around the office and they were chanting anti-gay slurs and threatening to kill the people who work for the organization. Let’s Walk Uganda – which has a rainbow in its logo – supports LGBTQ rights.

The organization called police because they feared violence, and the staff members were told that they were being taken into protective custody. They were arrested instead.

“Normally we will hear of maybe one arrest of someone from the community under these anti-gay laws in one month, but it is really unusual to see 16 people charged like this,” said Frank Mugisha of the organization Sexual Minorities Uganda.

The staff member said that this isn’t the first time the office has come under attack and that the “property is also currently at high risk as community members have threatened to burn the shelter if we do not shift in time to a safer space.”

The condoms, lubricant, and HIV medications may have been provided by the Ugandan government to the organization to be distributed as part of their work fighting HIV.

While Uganda’s Kill the Gays bill was overturned by a court on a procedural issue in 2014, homosexuality remains illegal in the country. It can be punished with up to life in prison.

Republicans have supported transgender rights in the past, but what about now?