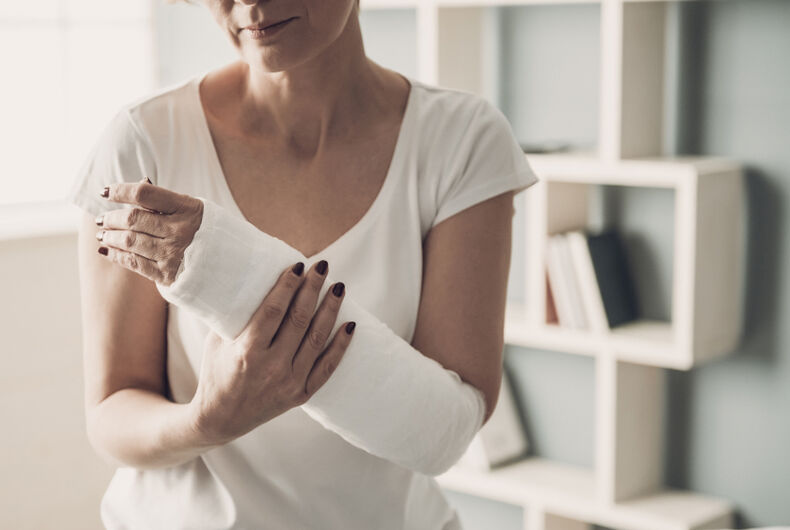 Related: Out-of-control judge had a lawyer arrested for defending the ‘Straight Pride’ protestors

While amongst the counter-protestors, Pelkie told the Edge Media Network (EMN) that a female Straight Pride attendee began throwing ice at a young female counter-protestor and then “started after the girl like she was going to stab her,” though Pelkie saw no knife.

Immediately, Pelkie says, 30 to 40 police officers jumped the barrier separating the marchers from the counter0protestors. Pelkie then pulled the ice-thrower’s male companion off of the counter-protestor and put him in a chokehold.

When an officer instructed her to release the hold, she did. She then tried to point out to police that the woman who instigated the scuffle was walking away.

“All of a sudden the policeman grabbed my head, shoved me backward onto the sidewalk, and I shattered my arm,” Pelkie said. “[Then] he got on me, pressed his knee into me, and started punching me in the head.”

“The officer eventually did get off of her,” writes EMN, at which point Pelkie “saw that her wrist was now bent at an alarming angle. Not only was her arm broken, but bone was jutting through the skin. Pelkie had sustained a compound fracture.”

Because an ambulance couldn’t make it through the crowds, nearby medics helped put her arm in a sling. She ended up taking public transport to a further location and had a neighbor pick her up in a car to transport her to the hospital.

A police sergeant reportedly took Pelkie’s statement while she was at the hospital. The sergeant said Internal Affairs would follow-up with her, but the follow-up was delayed due to a surgery to fix Pelkie’s arm. She says the surgery didn’t go well and fears she may never regain complete use of her arm again.

She adds that her broken arm has already derailed a trip she’d planned to help refugees at the U.S. southern border and ended a new job she’d lined up working as a chef at “an upscale assisted living facility.”

She’s considering suing the city to discourage future police brutality and to donate any reward to charity.

Among those who blamed police for exacerbating violence during the event, queer journalist Zack Ford wrote, “I believe that a majority, if not all, of these confrontations and altercations were caused by Boston Police.”

Mike Pence thinks homosexuality is ‘a choice’ and ‘a learned behavior’

Trans woman so badly burned that police couldn’t identify her