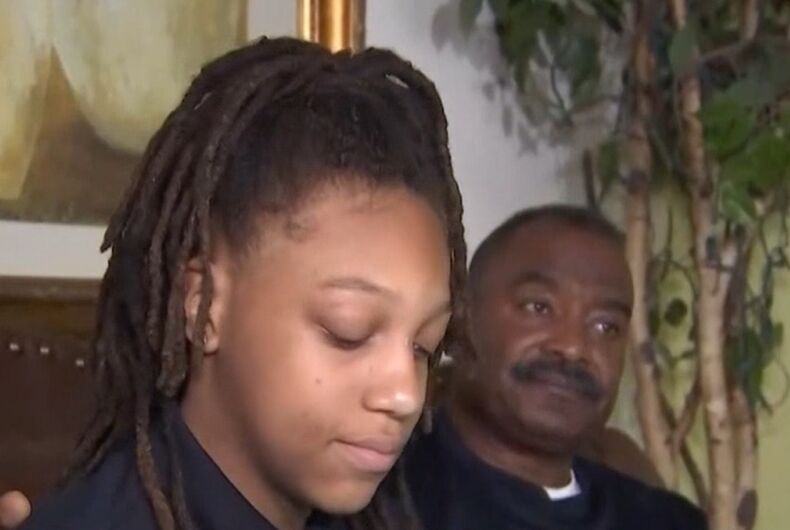 Amari Allen and her grandfatherPhoto: NBC

UPDATE: The girl who said she was attacked by three boys at the school has recanted her accusation.

“We can now confirm that the student who accused three of her classmates of assault has acknowledged that the allegations were false,” said Stephen Danish, head of the school, in a statement provided to the Daily Dot.

“To those young boys and their parents, we sincerely apologize for the pain and anxiety these allegations have caused,” the girl’s family said. “To the administrators and families of Immanuel Christian School, we are sorry for the damage this incident has done to trust within the school family and the undue scorn it has brought to the school.”

We had one hundred people with dreadlocks, Jamaicans and everything, ready to visit #ImmanuelChristianSchool to support Amari Allen. I'm extremely disappointed that she lied, but happy she was never assaulted.

ORIGINAL STORY: Several white boys at the school where Karen Pence teaches are accused of holding down a Black girl and cutting off her hair.

Pence, the wife of Mike Pence, teaches art at the Immanuel Christian School in Virginia. It’s a conservative Christian school that bans LGBTQ students and staff.

Now three white students at the school are being accused of attacking a Black student.

Amari Allen, 12, said that three white sixth grade boys made fun of her for her dreadlocks.

“They said my hair was nappy and I was ugly,” she told NBC 4 Washington.

Allen is a straight-A student and a violin player. She has attended Immanuel Christian since kindergarten and she said she likes her school.

The boys have been teasing her about her hair since the beginning of the school year. They have bullied her, insulted her, and stolen her lunch.

This past Monday, they attacked her.

She said that she went down the slide during recess when one of the boys grabbed her and put his hand over her mouth. Another boy held her arms. The third cut off her some of her hair.

“They put their hands over my mouth,” she recounted. “They put my hands behind my back. And they started cutting my hair and saying it was ugly.”

The bell rang and the boys ran off, laughing. She said that she was embarrassed and told no one what happened at school.

But when she got home, her grandmother, Cynthia Allen, noticed that parts of her hair were missing. She started crying and she told her grandmother what happened.

“It was like she just died. That’s how painful it was for me,” Cynthia Allen said.

“My heart just broke,” the girl’s grandfather said. “I was just paralyzed. I couldn’t get myself together.”

“We take seriously the emotional and physical well-being of all our students, and have a zero-tolerance policy for any kind of bullying or abuse,” Head of School Stephen Danish said in a statement. He said that he has asked police to investigate the attack.

But the victim’s grandparents aren’t sending her back to the school until they take action.

“Consequences should be implemented so that the school will send a strong message: ‘We will not tolerate this,'” Cynthia Allen said.

In January, Karen Pence accepted a part-time job at the private school.

The school’s application requires parents to sign a statement saying they will refrain from “participating in, supporting, or condoning sexual immorality, homosexual activity or bi-sexual activity.”

Teachers who apply to work at the school sign a statement that says they understand that “moral misconduct” that can put their jobs at risk includes “homosexual or lesbian sexual activity, polygamy, transgender identity, any other violation of the unique roles of male and female.”

Her work at the school led to outcry, and Mike Pence later said they “didn’t see that one coming.”

“Our kids went to this school,” he said in defense of Karen Pence’s decision to work there.

The Pences have not commented on the attack on Amari Allen.