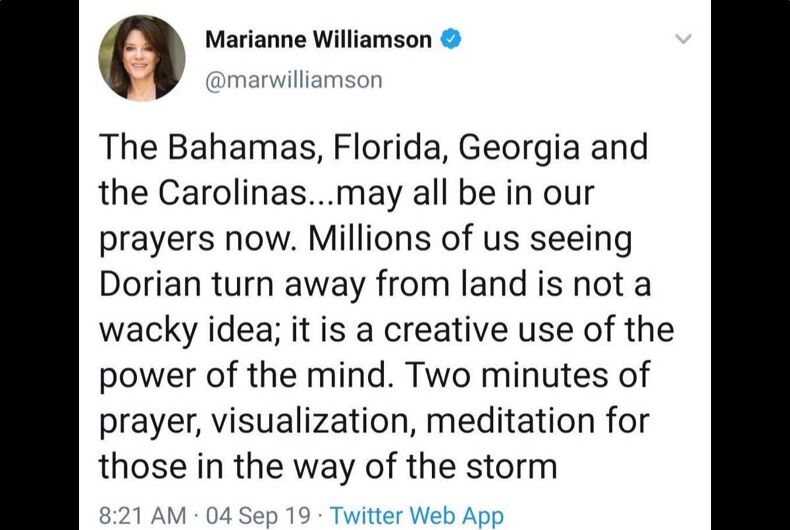 The religious right loves a good hurricane. Either they’re caused by acceptance of LGBT rights, the legalization of abortion decades ago, or the very existence of queer folk, they’ve got a reason up their sleeve each time that always involves demonizing someone for a natural weather event.

But the Christian Taliban is having a field day claiming credit for turning Hurricane Dorian away from the coast of Florida. The Category 5 storm weakened while sitting over top of the Bahamas for almost two straight days, causing complete devastation and killing locals.

Either Bahamians didn’t pray hard enough or American evangelicals don’t care about the safety of brown people. You decide.

Pat Robertson, the best known self-proclaimed weather master, told the viewers of his long running televangelist show that “worshippers at Calvary Christian Center in Ormond Beach praised God for shifting the storm a couple days ago, lessening the threat there, though they’d stockpiled supplies in a local warehouse just in case.”

Last year, Robertson claimed that his prayers stopped Hurricane Florence from smashing into his television studio in Virginia and shrugged off the storm’s massive damage, saying the people in the affected areas should have prayed as hard as he did.

Christian “prophet” Mark Taylor told his radio listeners that Dorian and mass shootings are a plot by liberals to “kill the will of man.”

“It’s not by coincidence that the hordes of chaos have been released because they know their time is short. This is one of the most dangerous times right now for us because this is war,” he bleated. “That hurricane right there, that is a declaration of war against the people.”

Christian prophetess and “weather warrior” Kat Kerr upped the ante by taking “authority” over the hurricane in the name of Jesus.

Everyone can relax now that prophetess and "weather warrior" Kat Kerr has taken authority over Hurricane Dorian in the name of Jesus. pic.twitter.com/hJOfqBNDVF

Not one to be left behind without some attention of her own, presidential candidate and self-help guru Marianne Williamson also claimed that the power of prayer turned the storm.

“The Bahamas, Florida, Georgia and the Carolinas…may all be in our prayers now. Millions of us seeing Dorian turn away from land is not a wacky idea; it is a creative use of the power of the mind. Two minutes of prayer, visualization, meditation for those in the way of the storm,” she tweeted.

Within hours – also known as “eternity” on social media – the tweet had been removed from her timeline.

Meanwhile, Florida man also has some ideas on how to turn a hurricane. Drop some ice in the water and cool it all down. Problem solved.

I love my State. https://t.co/9HJLjpkrSk