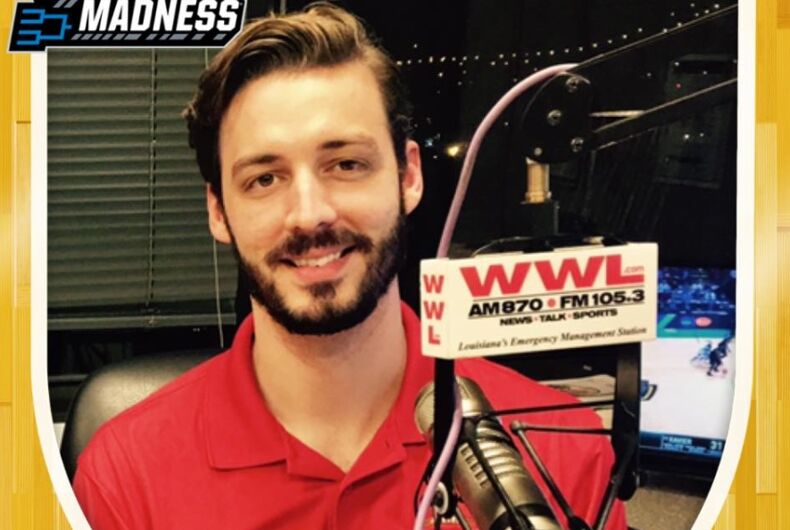 Earlier this month, a radio station’s official Twitter account called one of its hosts a “fag.” Now the station is accusing the host of sending the tweet himself, but his lawyer said that a lie detector test has exonerated him.

Seth Dunlap hosted The Last Lap on WWL in New Orleans. He’s gay, and he says he doesn’t talk about it on his show.

But after he wrote a post on Facebook calling out NFL player Drew Brees for doing a video for an anti-LGBTQ hate group, WWL’s Twitter account retweeted one of his tweets with the message “you’re a fag.”

The day after the tweet was sent, Dunlap said that he would be taking some time off from the show.

This week, though, he said that the station still hasn’t apologized for the tweet. Instead, the station is accusing him of sending the tweet in an attempt to “extort” money from the station.

WWL Senior Vice President Kevin Cassidy told New Orleans police that the station hired a digital forensic expert who said that the tweet was sent from an IP address associated with Dunlap’s phone.

The station said that Dunlap threatened to sue them for $1.8 million over the tweet and that he had “unpaid credit cards and personal loans.”

In a meeting between Dunlap, his lawyer Megan Kiefer, and station management on Tuesday, Cassidy accused Dunlap of extortion. That meeting reportedly ended with Dunlap and his lawyer leaving and telling the station to go to the District Attorney’s office if they really believe they’re being extorted.

Kiefer said in a statement that Dunlap took a polygraph test on Wednesday, which affirmed that he was telling the truth when he said that he did not send the tweet.

“The results of the testing, which have a 95 percent accuracy rate, concluded that Seth was truthful during the polygraph testing, and completely exonerated Seth from any involvement in the offense tweet whatsoever,” she said.

Two weeks ago, Dunlap issued a public statement about the tweet.

“Living as an openly gay man in the Deep South with a career in sports broadcasting, a career field that is traditionally highly homophobic, is incomprehensibly challenging,” he wrote.

“There are too many spaces and workplaces where overt hate and bigotry are not only tolerated, but actively promoted. Because queer people fear for their job security, as well as retaliation from those in positions of power, these incidents almost always go unreported or are swept under the rug.”

My statement today. I look forward to speaking more about this in the future, and returning soon to the career I love. Thanks for all of the support. pic.twitter.com/WpJZQDJgxL

Dunlap has not been on the air since the tweet was sent.

UPDATED: Three white boys did not hold down a black girl at Karen Pence’s school & cut her hair