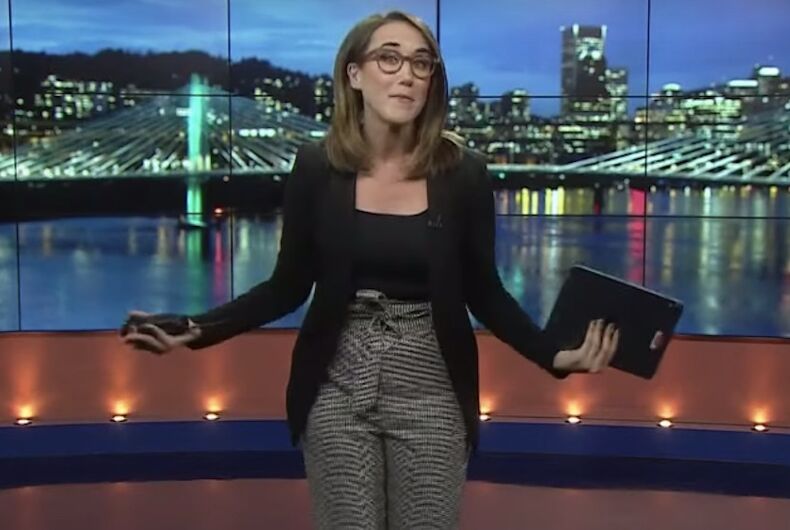 After re-posting his messages online, Vespa stood up to the commenter on-the-air. While we don’t know how Vespa self-identifies, her response to Jeffrey sent a message to guys like him and everyone else who wants to express themselves free of discrimination.

Related: Hasbro’s new Monopoly puts gender inequality on the board

“Hi Maggie, just wanted to let you know that the clothes you’ve been wearing, especially those crazy pants that ride halfway up your torso, are not cool-looking in any way! They look rediculous on you. Please change your wardrobe, you’re way too pretty to look so foolish.”

The next day, he wrote, “OMG, you really looked uncomfortably tonight. Try dressing like a normal woman. Doesn’t KGW pay you enough for a wardrobe makeover?”

Addressing his criticism on her newscast, Vespa said, “I assume Jeffrey’s bizarre annoyance is rooted in high-waisted pants…. This is dumb, we know that. These are my pants. I like them, I bought them.”

She mentioned that after putting his comments on Facebook and Twitter, hundreds of people commented about the pressure women face — especially those in the public eye — to “embody the epitome of physical attractiveness at all times.”

“If we don’t,” Vespa said, “it’s somehow seen as a sign that we’re less credible and less capable.” She added, “By and large, guys don’t have to deal with this.”

Vespa then took a stand by wearing high-waisted pants again during every single broadcast she recorded over the following weekend. She then had her producer take pictures so she could share them on-the-air.

Some of her other female colleagues supportively wore their own high-waisted pants on-the-air and on social media too.

“Look,” Vespa said, “our goal here is to send a message to women, to girls, to everyone: Dress how you want. Look how you want. And if anyone tries to make you feel less-than because of that, that’s their problem, not yours.”

“In other words,” she added, “there’s no one way for a ‘normal woman’ to look or be. Ten years ago if I had heard from a Jeffrey, I would’ve needed someone to remind me of that. Now, I’m very comfortable letting it roll off my back while I wear my high-waisted pants.”