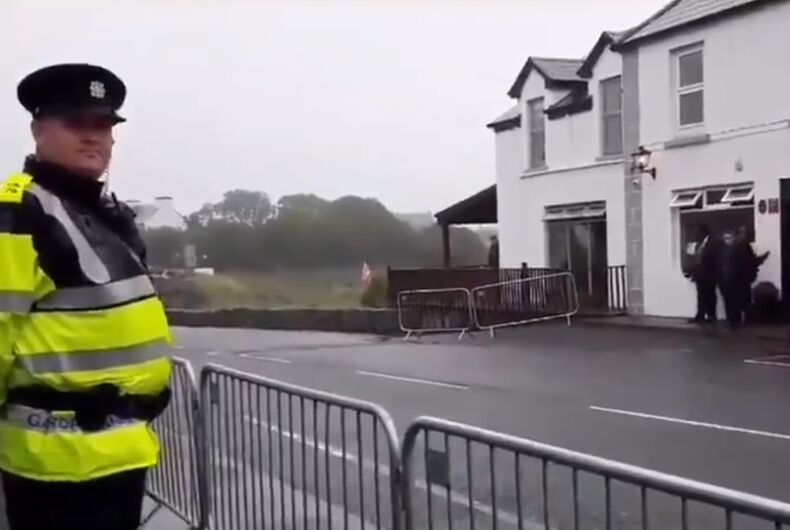 Mike Pence visited the town of Doonbeg, Ireland, and the welcome he received was anything but warm.

Pence visited Doonbeg – where his great-grandmother grew up – as part of his trip to Europe this week. And when he showed up, the streets were almost empty.

“Literally no one showed up to welcome him,” one person on Twitter posted with video of streets that were blocked off by police for supporters but were almost entirely empty, except for staffers and police officers.

But two people did show up eventually. Sheila and Larry Sheehan, a religious straight couple from central Ireland, stood alone in their support of Pence.

“We love him, he’s a bible-believing Christian and a lovely man of God and we love him and Donald Trump,” Sheila Sheehan told the Press Association news agency.

“The road to heaven is narrow and the road to hell is wide, and we’re here on the narrow; there’s only two of us.”

Larry Sheehan said “America is blessed by” Pence and Trump “because they support Israel and God said to Abraham: ‘I will bless those who bless you,’ so he’s blessing America with those two men.”

When asked about Pence meeting with their national leader Leo Varadkar, who is gay, Larry Sheehan said, “It’s Adam and Eve, not Adam and Steve.”

Pence’s trip to Doonbeg was controversial from the start. He visited Ireland to meet with Varadkar in Dublin, and Doonbeg is on the other side of the country.

It’s hard to see why he would visit the town – bringing his security detail on a cross-country trip – except to stay at the Trump International Golf Links & Hotel there.

Representative Ted Lieu (D-CA) accused Pence of “funneling taxpayer money to” Trump by staying at the out-of-the-way resort, which he said was “sooooooo corrupt.”

Hey @VP @mike_pence: You took an oath to the Constitution, not to @realDonaldTrump. Funneling taxpayer money to @POTUS by staying at this Trump resort is sooooooo corrupt.

Also, I hope you don't encounter bedbugs. Many people say there are lots of bedbugs at Trump properties. https://t.co/KgJfnMRSgt

Pence defended the choice to stay at the Trump resort by citing unspecified security reasons and his great-grandmother.

Pence’s Chief of Staff Marc Short said that Trump suggested the visit, but clarified that it was not “a command,” but “a suggestion.”

Pence was better received in Iceland. He is holding meetings at the historic Höfði House, and across the street is the headquarters of the company Advania. They took down their company flags and flew rainbow flags just for Pence.

“We just felt the need to celebrate diversity today and wanted to show that by flying the flags,” said Ægir Már Þórisson, director of Advania.

Rainbow flags on display outside the Höfði House, where Vice President Mike Pence is holding meetings this afternoon in Iceland. It’s the site of the famous summit between Reagan and Gorbachev. pic.twitter.com/Vz5MehOObi

Charges were dropped against Aaron Schock. He had a gay old time in West Hollywood to celebrate.