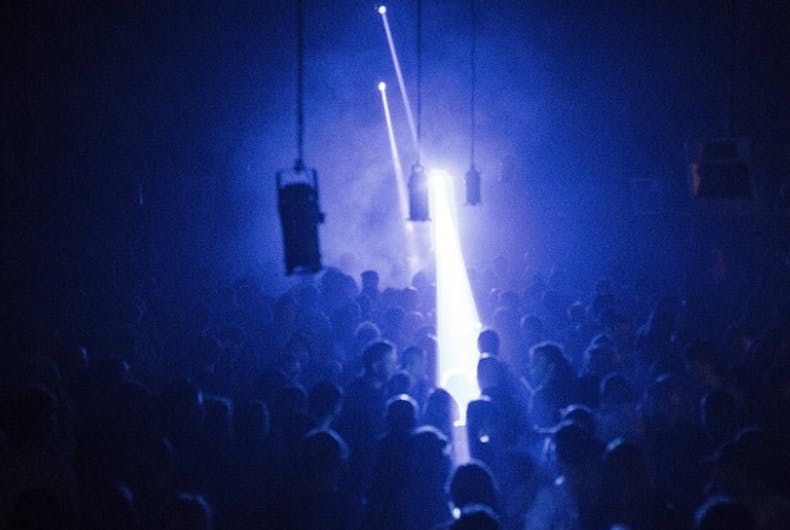 “They want our social security numbers before they’ll let us in — plus our birthdates and access to our Facebook profile.”

We’re currently living in Tbilisi, Georgia (on the far edge of Eastern Europe), and we and some friends were planning to go to Horoom Nights, a special, once-a-month, queer night held in Bassiani, one of Europe’s most famous nightclubs. It’s an industrial-like dance club located in the bowels of a Soviet-era stadium.

But a friend was telling us that the organizers of the event had to be very careful who they let in, because they were worried about far-right groups infiltrating it and causing violence — and possibly outing patrons. So they thoroughly vet everyone who wants to come.

They aren’t being paranoid.

Life in Georgia, bordered by Armenia, Russia, Turkey, and Azerbaijan, is a tough part of the world for LGBTQ folk. While not as bad as its neighbors, Georgia is still a pretty homophobic country. Back in 2012 and 2013, attempts to hold rallies for LGBTQ equality led to violence. In 2013, a mob of thousands of ultra-conservative Eastern Orthodox Christians descended upon a group of several dozen brave LGBT activists, even smashing the windows of the police van that was spiriting them away.

And this year’s Pride events were called off due to more threats of violence, as well as ongoing political tensions with Russia. A subsequent rally ended abruptly when a local anti-gay businessman, Levan Vasadze, led another mob determined to stop the event.

But things are slowly changing here, and there is one night a month when LGBTQ Georgians can go and completely be themselves. It’s called Horoom Nights, and for a little while at least, they get to be out and proud, at least among their friends.

As temporary residents of the city, we wanted to see Horoom Nights for ourselves. Luckily, thanks to some personal connections, we were able to avoid providing our passport numbers and social media information. We didn’t want that stuff getting into the wrong hands.

The nightclub is located in a labyrinth of concrete rooms and corridors underneath Dinamo Arena, the massive stadium where the Georgian national rugby union and national football teams play their matches. Irony lives: Georgia’s queerest event happens in the same place where some of the country’s most macho events take place.

First, we met up with two female friends at a nearby bar. There, one of them put a little guyliner on us — because, hey, why not?

Doors opened at midnight, and we arrived at one AM.

They’re not kidding about the tight security. A secret bar code had been sent to us via email, and we still needed ID to prove we were who we said we were. Everything was closely scrutinized. We were also thoroughly patted down for weapons, then stickers were placed over the lenses of the cameras on our phones — so we couldn’t take photos of the other attendees, who almost certainly didn’t want their identities revealed.

Once we cleared security, we wandered through several long dark, concrete corridors that felt straight out of a post-apocalyptic film — Blade Runnermeets Mad Max. You don’t follow signs or arrows on the floor, but rather the pulse of techno music.

At one point, a passage veered off into a “darkroom” area, lit with soft red lights. Inside the shadows, clothes rustled, and we heard urgent moans. This isn’t our thing, but since so many young Georgians live with their parents, these can be the only kinds of places where some LGBTQ men can have sex without interruption. (We did wonder: is the dark room in operation when the club is heterosexual?)

We were disappointed that the main dance floor was closed, since it’s located on the bottom of an empty Olympic swimming pool.

But we weren’t disappointed in Horoom Nights. We headed up some stairs, turned a corner, and found ourselves in the heart of queer Tbilisi. The local Georgian crowd — and they did all seem to be locals — was giving into the atmosphere, dancing with wild abandon.

It was a young crowd, though there were folks in their forties present. It was also mostly male, and the vibe was strangely masculine: men who looked like they’d just come from a construction site, and shirtless studs pantomiming boxing routines.

Not everyone looked the same: punk women chatted with tattooed men, lean twinks writhed next to hirsute leather folk. There were even a few straight-laced office types.

But almost everyone had come here for the same reason: to dance, and flirt, and drink, and check out other people without fear.

Mostly, they’d come here to be themselves. These people were seriously letting loose, celebrating every precious second that the club is a safe and open LGBTQ space.

Simply attending Horoom Nights is a brave act in a place like Georgia. Last year, the club was raided, and the organizers arrested (though eventually released with all charges dropped).

But Saturday night, there was no sense of menace or oppression. There was just hundreds of queer Georgians in all shapes and sizes, and all kinds of gender expression, free for a few hours to completely be themselves.

Georgians are not an especially expressive people. Greetings are gruff, and sometimes people stare at us suspiciously. (Cultural differences like this probably stem from an especially unforgiving history).

But at Horoom Nights, we saw more smiling, happy faces than the rest of our time in Georgia combined.

Change is coming to Georgia. For the time being, it’s been held in check by the concrete walls of this fascinating dance club. But it won’t stay contained forever.

Sean Spicer is calling on Jesus to help him win ‘Dancing With The Stars.’ He’ll need the assist.