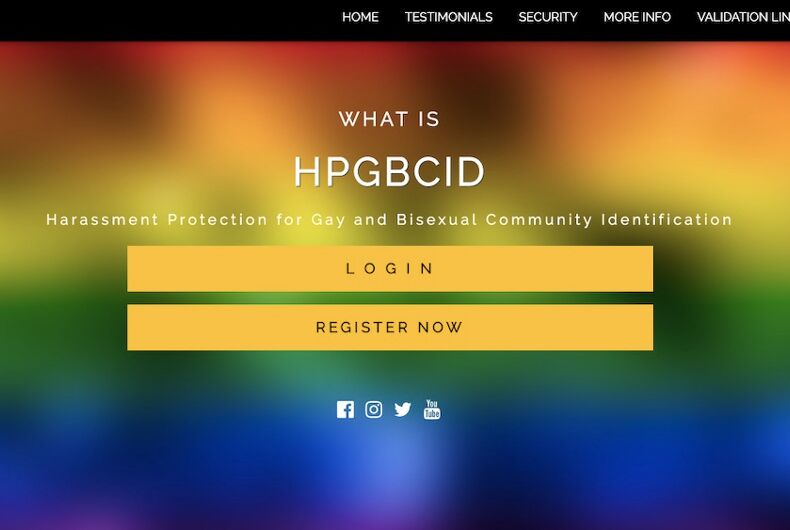 There’s a scam going around on Grindr, Scruff and other social media right now for a “service” called Harassment Protection for Gay and Bisexual Community Identification (HPGBCID) that’s supposed to verify that you aren’t listed on any legal registries as a rapist or sex offender.

After you enter your credit card info and personal information, they supposedly check legal registries and then give you a QR code that verifies to people that you used their service and aren’t a threat. The only catch: It’s a total scam.

Yes, their website looks legit at first glance. Their Instagram social media button even links to LGBTQ Nation‘s Instagram page, but let us be absolutely clear: We are not in any affiliated with them. They’re a scam.

How do we know it’s a scam?

In addition to the people writing us to tell us that they’ve been ripped off by the website, the site’s social media buttons link to other organization’s pages: Its Facebook button goes to the Official Facebook LGBTQ+ Resource Page, its Instagram button goes to LGBTQ Nation‘s Instagram page, its Twitter button goes to the @LGBTQ Twitter account and its YouTube button leads to a generic video about coming out posted by a similar sounding (and now-defunct) scam service called PSHV ID.

As such, HPGBCID has no social media accounts and no other email, contact forms or info to get in touch with them, hardly something a legitimate business would omit.

Here’s an additional clue: Under the “testimonials” section of their website, there’s a picture of a couple called “Mark and Chris” who say that they met on Grindr in Nov. 2016.

Except Mark and Chris’ picture actually belongs to a real-life couple named Nick Cardello and Kurt English who have been together since 1992 — the photo itself was taken at Washington Pride in 1993.

We’re looking into getting the website shut down, but in the meanwhile, spread the word and don’t you dare give them your credit card info.