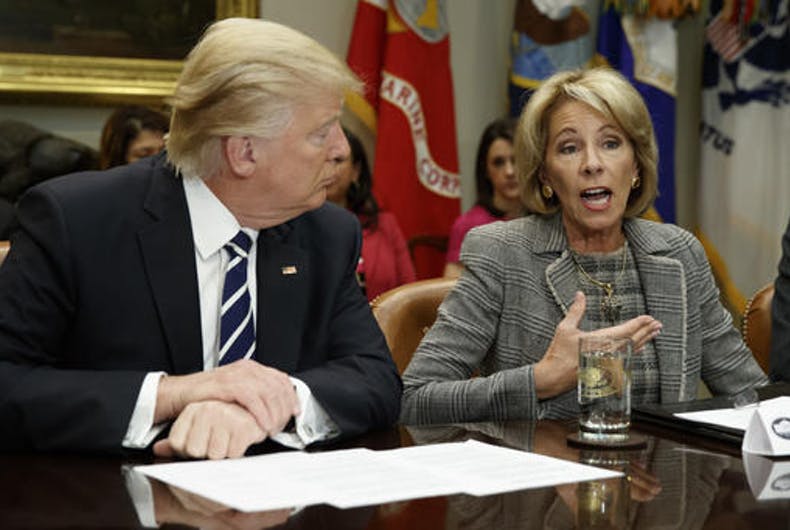 Secretary of Education Betsy DeVos is promoting a school that bans transgender students and staff today.

This week DeVos set off on her “2019 Back-to-School Tour.” The school she is visiting today is the Harrisburg Catholic Elementary School in Harrisburg, Pennsylvania.

While the Catholic Church is not exactly trans-friendly, many Catholic schools have no specific policy on gender identity issues. But the Diocese of Harrisburg adopted a policy in 2015 that refers to “efforts to chemically and/or surgically alter the given biology” of sex characteristics.

“To attempt to make accommodations for such persons would be to cooperate in the immoral action and impose an unacceptable burden on others in the school community,” the policy states. So transgender students are banned, and transgender staff members are similarly banned.

DeVos will participate in a roundtable discussion at the school about the state’s voucher program, which forks over public money to private schools.

Last year, House Democrats questioned DeVos about using federal money to fund schools that discriminate against LGBTQ people. She dodged the question but ultimately said, “Where federal dollars flow, federal law must be adhered to.”

She has previously made it clear that she does not believe federal law bans discrimination against LGBTQ people.

“The secretary’s visit is focused on the legislature’s efforts to expand [Pennsylvania’s private school] scholarship program,” a spokesperson for DeVos said.