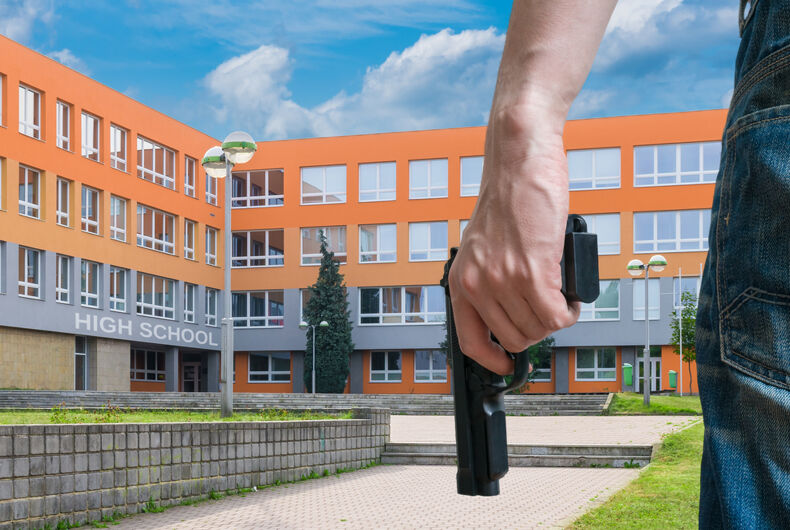 An 8th grade student has been arrested and faces a felony charge for making violent threats against people of color and LGBTQ people.

The 13-year-old who goes to Leewood K-8 in Miami-Dade County, Florida, was arrested last Thursday after he sent a threatening message in a group chat about killing minority students.

Related: This teacher says he was forced to quit because he had to call trans students by their name

“Wanna hear what is oppressed?” he allegedly wrote in the group chat. “My Shotgun ammo because I am wasting it on minorities like you. Do you think I won’t hesitate to shoot you?”

“I am on my way to murder you. I hate not only you and your ‘LGBT community’ but I also hate your ‘blacklivesmatter’ because, guess what, white lives matter too.”

“I have military training so I can kill you real quick.”

He also wrote in the group chat that the only reason others were shocked was that he’s a “straight white male.”

One of the students who received the messages reported them to the school.

The threats themselves were deemed “noncredible.”

The teen was arrested and he faces one charge of written threats to kill. He was taken to a Juvenile Assessment Center.

He told investigators that he did not write the messages. He said that he copied and pasted them from somewhere else.

The teens grandfather told CBS Local that his grandson was “framed.”

“First of all, it’s not credible at all,” the grandfather said. “He’s a good kid. Maybe he was playing around or joking around. He’s been framed. Someone used his phone.”

“How could he hate minorities. He’s a minority himself.”

The school district said that it has to take the threats seriously.

“Miami-Dade County Public Schools goes to great lengths to promote a culture of respect, restraint, and tolerance among our students,” a spokesperson for the district said.

“Students who choose negative words or actions over the values we promote will learn a tough lesson. Written and verbal threats of any kind will be handled swiftly and may result in severe consequences.”