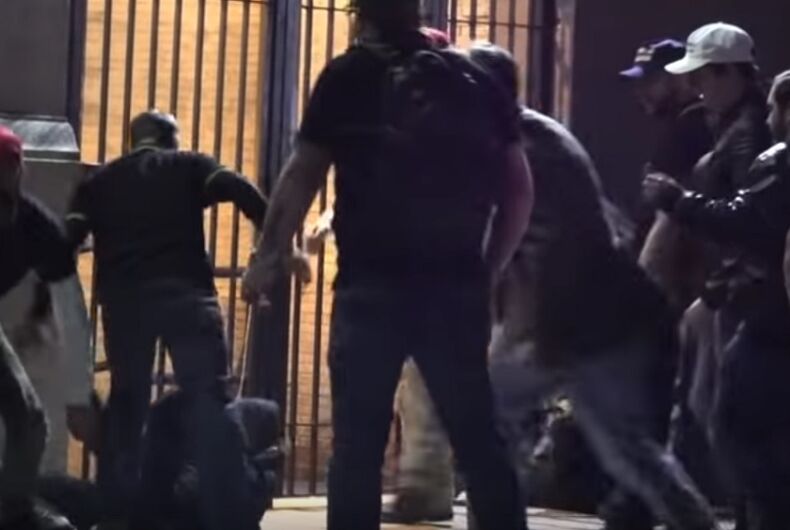 Two members of the white nationalist hate group Proud Boys were convicted for beating up a protestor while shouting “faggot.”

Last October, a group of Proud Boys members beat up four alleged Antifa protestors outside of a Metropolitan Republican Club speaking event. Video circulated that showed over a dozen members of the hate group beating up a leftist protestor while calling him a “faggot.”

Ten of the Proud Boys were arrested and faced charges. Seven of them pled guilty, and now two of the others – Maxwell Hare and John Kinsman – have been found guilty of attempted gang assault, riot, and attempted assault.

The last Proud Boy’s trial has not yet started.

Hare’s and Kinsman’s lawyers argued that they were just defending themselves, even as video showed them as part of a group beating a man who was on the ground.

They also insisted at the trial that the Proud Boys, which the SPLC has described a hate group that rewards its members’ violence, is about “national pride and brotherhood,” not racism.

Kinsman said that the group is “a good bunch of drinking buddies that were right-wing.”

Prosecutor Joshua Steinglass showed footage of violent confrontations that the Proud Boys have engaged in, as well as a photo of Hare holding an assault rifle and an Antifa flag with the logo crossed out.

“As violent extremism rises in America, a Manhattan jury has declared in one voice that New Yorkers will not tolerate mob violence in our own backyard,” said District Attorney Cy Vance Jr. in a statement. “These defendants transformed a quiet, residential street into the site of a battle royal, kicking and beating four individuals in a brutal act of political violence.”

The two face up to 15 years in prison.

She met her wife at church so the pastor kicked them out. Then he sent them a letter.