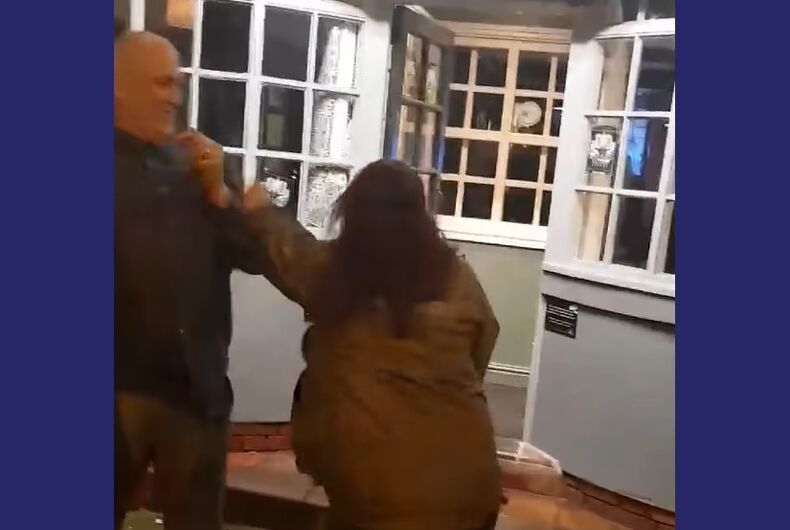 The woman punched Carrington, and he refused to fight back.Photo: via Facebook

A drunk woman slapped a gay man while calling him a faggot… and she was caught on video.

The 52-year-old woman was standing outside the Black Friar pub in Newcastle-under-Lyme in the UK when she picked a fight with the owner of the pub, Ryan Carrington, this past Friday.

The video starts when the woman is calling Carrington a “fucking fat faggot.”

“You’re a gay bod and you don’t like women. That’s what your problem is,” she slurs as Carrington barely moves, vaping.

Related: Woman attacked after being recognized from gay marriage interview

She makes noises and taunts him, and he replies: “I’ve been insulted by better than you darling, by people with far more intelligence.”

She keeps on taunting him, calling him a “fat faggot” repeatedly, and making gestures like she wants to fight him, a much larger, much more sober man.

She shoves him, and his demeanor changes. He’s now telling her to stay away from him, and she slaps him again.

“Don’t you dare…. You’ve got no respect for women,” she says. She gets more agitated and starts punching Carrington. He doesn’t punch back.

Two women get out of the pub and try to defend him, but he puts himself in between them and the drunk to protect them. Police then show up.

Drunken woman launches homophobic attack.Posted to educate the public about LGBT issues on our streets

After the video was posted to Facebook, Carrington wrote in a separate post that he pities the woman.

“Being a publican [pub owner] I am well aware of cameras and have to act accordingly, yes my patience was tested but you have to think of pity for this woman,” he wrote. He said that the confrontation started long before the video began.

“I doubt it’s the life she would have chosen if she had a choice. Let’s not condemn her, let’s try to help and educate, far more rewarding.”

Why do people send nude photos of themselves to strangers & lovers?