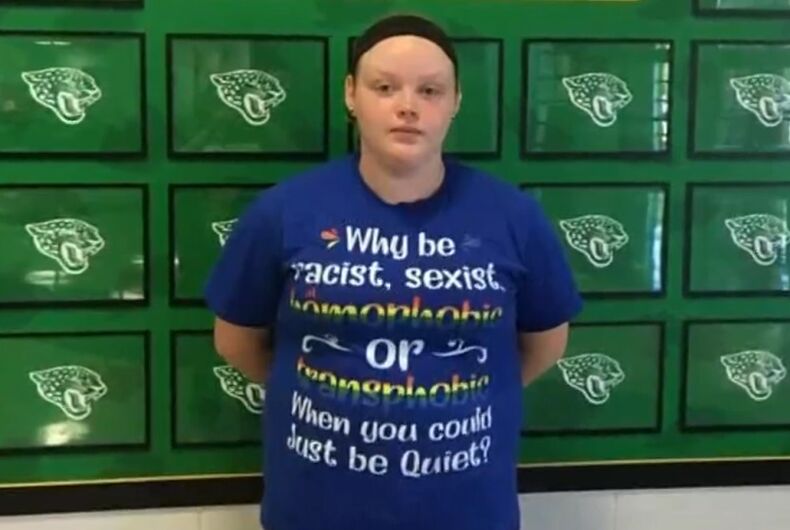 A student in Indiana was sent home from school because she wore an anti-discrimination T-shirt. Her parents now want the school to apologize.

Eighth grade student Renee Williams wore a T-shirt to Highland Hills Middle School in Georgetown, Indiana, this past Wednesday that said “Why be racist, sexist, homophobic or transphobic when you could just be quiet?”

“Of course she is a growing girl herself so she’s going to learn all about sexism.”

She was taken to the principal’s office by a teacher, where she was forced to put on a sweater.

Related: Gay man sent home for wearing shorts to work on a hot day returns in a dress

Since it’s August in southern Indiana, she got hot later and took off the sweater. She even asked her teacher permission to take the sweater off, and the teacher gave her an OK because the teacher didn’t think that the T-shirt violated dress code.

Later in the day, the principal confronted her again about the T-shirt.

“The principal confronted her during the 8th-grade lunch in front of all of the 8th graders and told her that she cannot wear her sexuality on her shirt,” the stepmother said. “Our daughter chose to come home with us.”

In a statement, New Albany Floyd County Schools said, “As a school district, we do all we can to maintain the integrity of a focused age-appropriate learning environment. This includes minimizing potential distractions as they arise.”

The parents have reached out to a school board member, but were told that wearing an anti-racism T-shirt is the same as wearing a swastika to school.

“He said that if we let her wear her shirt to school, then what’s to keep us from having white supremacists come in wearing swastikas on their shirts,” the stepmother said.

On Thursday, several of her classmates walked out of class in solidarity with the teen.