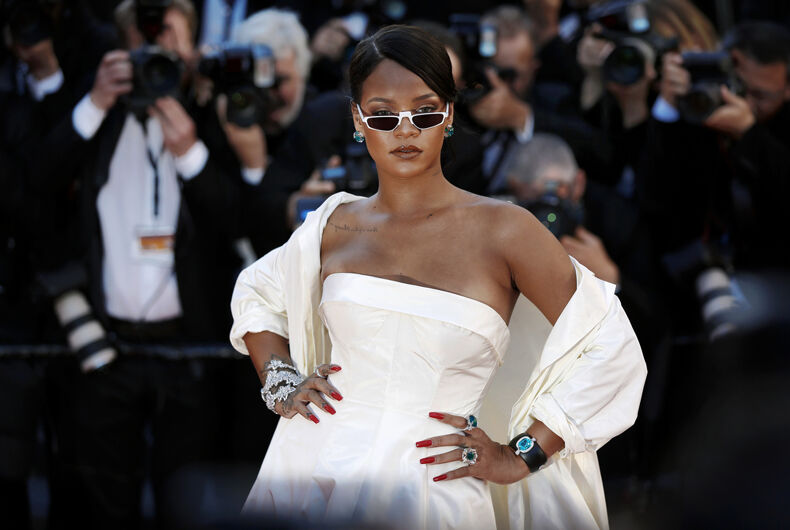 Singer Rihanna attends the 'Okja' photo-call during the 70th Cannes Film Festival on May 19, 2017Photo: Shutterstock

Pop singer Rihanna has put President Donald Trump on blast after he tweeted a mealy-mouthed statement in response to this weekend’s double domestic terrorist attack by mass shooters.

One gunman opened fire in an El Paso, Texas, Walmart; he killed 21 people before he was arrested. Hours later, another gunman killed nine people – including his sister – within 30 seconds before he was shot and killed by officers.

As in similar attacks, the El Paso gunman left a manifest online that repeated racist language used by Trump on the campaign trail and on Twitter. The White House denied that the President’s own racist language and violent remarks had encouraged the shooter despite the undeniable parallels.

While Trump offered faux sympathy on social media, he did not speak to the media on the subject until after he returned from his weekend golf getaway at one of his resorts. When he did address the nation during a short speech this morning, he blamed video games and mental illness for the nonstop mass shootings and ignored the role of hate speech and rising white supremacist groups under his presidency.

….Melania and I send our heartfelt thoughts and prayers to the great people of Texas.

Rihanna wasn’t here for Trump’s “thoughts and prayers” and proceeded to lay it all on the line for the deluded reality show host turned politician.

“Donald, you spelt ‘terrorism’ wrong!” she wrote on Instagram and then shared on Twitter. “Your country had 2 terrorist attacks back to back hours apart leaving almost 30 innocent people dead. This just days after yet another terrorist attack in California where a terrorist was able to LEGALLY purchase an assault rifle (AK-47) in Vegas, then drive hours to a food festival in Cali leaving 6 more people dead including a young infant baby boy!”

Trump doesn’t pull the trigger during domestic terror attacks. He arms the shooters.