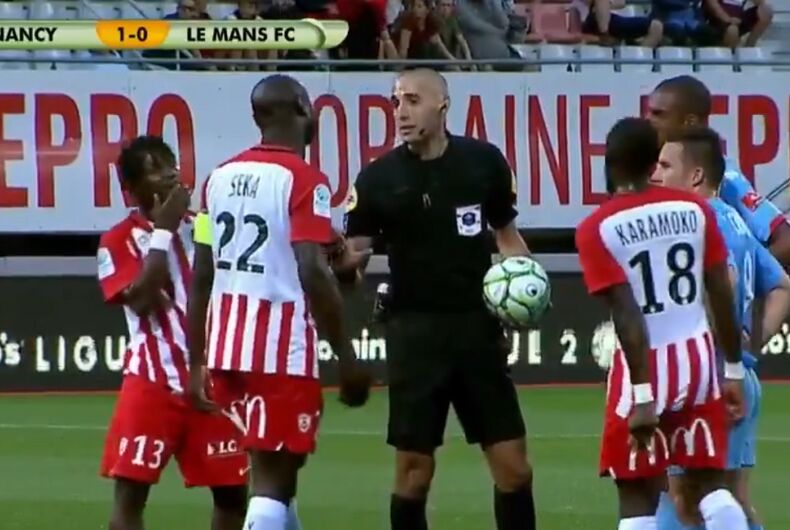 Referee Mehdi Mokhtari explains why he stopped the match to players.Photo: [email protected]

A referee in France stopped a soccer match to get the audience to stop a homophobic chant.

Mehdi Mokhtari was the referee at a minor league match between Nancy and Le Mans this past Friday.

Fans of the Nancy team got mad at the league and started chanting “La Ligue, on t’encule” – roughly “Fuck you in the ass, League.”

“Enculé” as a noun means “sodomite” in French and one French slang dictionary defines it as a homophobic slur that can be used against gay men but also as a general insult.

Related: Mexico’s soccer fans may be banned from stadium after 3rd fine for antigay slur

Mokhtari stopped the match there and players for Nancy asked fans to knock it off. The match resumed about a minute later.

This is the first time that a soccer match was stopped in France due to homophobic chants. Earlier this year, Minister of Sport Roxana Maracineanu said that there would be sanctions for teams whose fans engage in homophobia during matches.

Her attempt to end the homophobic chants was met with strong resistance from soccer fans. The president of the Professional Football League in France, Nathalie Boy de la Tour, said that homophobia is part of the “folklore” of soccer fandom, an “expression of working class fervor and it must be understood as such.”

There is now talk of Nancy’s team facing sanctions for the homophobic chants, and the Professional Football League is set to investigate the case on Wednesday.

On Twitter, Maracineanu praised the referee for stopping the game.

Replies to her tweet, though, show a lot of people pretending not to understand how the chant was homophobic, or saying that homophobic chants are part of stadium culture, or saying that photos of her standing near Muslim people mean that she can’t oppose homophobia.

In other words, she’s fighting an uphill battle.

This mayor just came out as gay at age 58. He says he should have done it sooner.