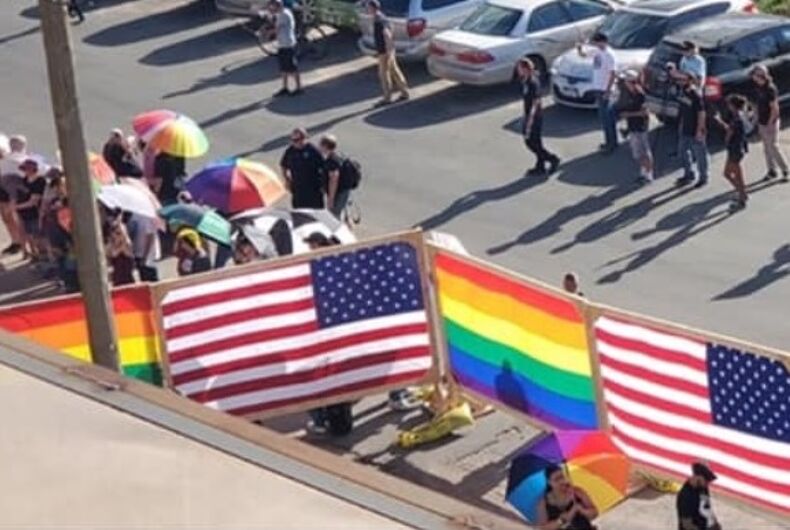 Parents with rainbow umbrellas and rainbow flags shield kids from the Proud Boys.

The Proud Boys is protesting an all-ages drag show in Colorado, but adults are stepping in to protect the kids, but parents have come up with an ingenious solution to shield the children from the fascists.

Charles Rozanski owns Mile High Comics in Denver. He started a monthly drag show called Drag For All Ages that raises money for a scholarship fund.

Rozanski wrote in the store’s newsletter that the drag show was getting protested by “a very raucous mob of 18-20 homophobic protestors.” He wrote on Facebook that several of the protestors had shields that said “Proud Boys.”

The protestors were shouting “that our allowing our young people to perform in a Family-friendly drag show constituted child abuse.”

“Their militaristic attire, and the masks and hoods of several other protestors, absolutely appeared to be threatening,” he wrote.

The Proud Boys are a hate group that encourages violence among its members. Last year they were caught beating up leftwing protestors while calling one a “faggot” – several members of the group were prosecuted for their involvement in that attack.

The group also organizes far-right rallies in Oregon where white supremacist groups show up. Their members have also been arrested in that state for violent crimes.

So it’s not surprising that Rozanski was worried about his store’s patrons and, more immediately, about the hateful message harming the young people who go to the show. He said that the two police officers that the store hired for security seemed “inadequate.”

But several participants in the show came up with a great solution to protect the kids: rainbow umbrellas.

“The good news is that Eli Bazan and Pasha Eve have organized a wonderful ‘Parasol Patrol’ group that shields our attendees from much of the nastiness,” Rozanski wrote on Facebook.

“Over 75 brave parents and other supporters showed up yesterday bearing colorful umbrellas, which they used to shield our visitors and performers from the noise and view of our protestors. As a result, everything was fine, except for a little added noise in our parking lot.”

While our Family Friendly All-Ages Drag Show was a wonderful success last evening, the 400+ attendees who wished to…

Did Old Navy force some employees out of sight when ‘Queer Eye’ came to film in a store?

A cop forced a trans women to have sex with him. He pled guilty to paying a prostitute.