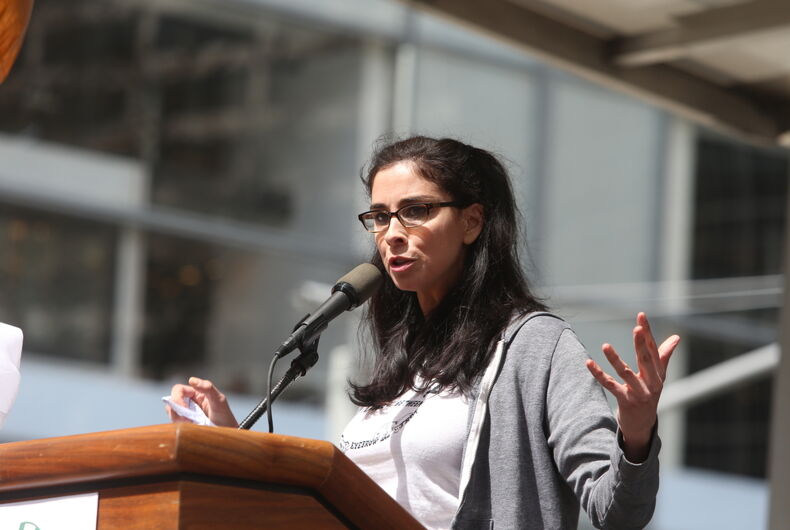 APRIL 15 2017: Thousands turned out for a "Tax Day" rally at Bryant Park & march to Trump Tower demanding the President release his taxes.Photo: Shutterstcok

One of the nation’s most extreme antigay pastors has called for the death of comedian Sarah Silverman and the actress isn’t about to let it go unnoticed.

Adam Fannin, formerly of the Stedfast Baptist Church in Jacksonville, Florida, now preaches at the Law of Liberty Baptist Church. Stedfast is best known for being the home of radical preacher Donnie Romero who called for God to “finish the job” after the Pulse Nightclub mass shooting that killed dozens of mostly young gay Latinos.

Fannin left Stedfast when Romero resigned after admitting to the “sins” of gambling, smoking marijuana, and hiring sex workers. The church was labelled an anti-LGBTQ hate group by the Southern Poverty Law Center in 2015.

Silverman tweeted video of Fannin telling parishioners that she is a “witch” in a strikingly antisemitic sermon. “This is Adam Fannin of the Stedfast Baptist Church in Florida and he is going to get me killed,” she wrote. The comedian was unaware Fannin had switched churches.

During the sermon, Fannin used extremely offensive remarks about Jewish people and said he hoped she dies because she would “put Jesus to death again.”

“You know these Jewish false prophets, anti-Christian, anti-God, they’re willing to put Jesus to death again,” Fannin says in the video. “You heard this comedian Sarah Silverman? You guys know who I’m talking about? She brags about ‘I’d do it again.’ Listen, she is a witch. She is a Jezebel. She is a God-hating whore of Zionism.”

“I hope that God breaks her teeth out and she dies. She is a wicked person and she is like the perfect representation of religious Judaism. She is Satan’s scoffer and she is there to take the world and make ’em laugh and then diss Jesus, try to take away the respect from Jesus.”

In a later statement, Silverman elaborated, saying, “It goes like this: Someone on the Right made a meme of a joke from Jesus Is Magic, a comedy special I did in character, and presented it as if I was saying it at a press conference. It’s a picture of me with the quote, ‘I’m glad the Jews killed Jesus. I’d do it again!’ And THAT is what triggered the pastor.”

“So, the person who made the meme knew it was comedy and intentionally repurposed it as real, knowing it would influence a swath of people who see it and share it everyday. And that’s America today. Incitements of violence based on lies and the disingenuous re-framings of truth.”

In a statement on their Facebook page, Stedfast Baptist distanced itself from Fannin, writing, “For those who haven’t been paying attention: Adam Fannin is NOT affiliated with Stedfast Jacksonville anymore. He started his own ‘church’ called Law of Liberty Baptist Church. Our pastor is Jonathan Shelley.”

The FBI would not confirm whether or not it had opened an investigation into Fannin’s hate speech and nonstop calls for violence.

This is Adam Fannin of the Stedfast Baptist Church in Florida and he is going to get me killed. pic.twitter.com/I6Us59o59v