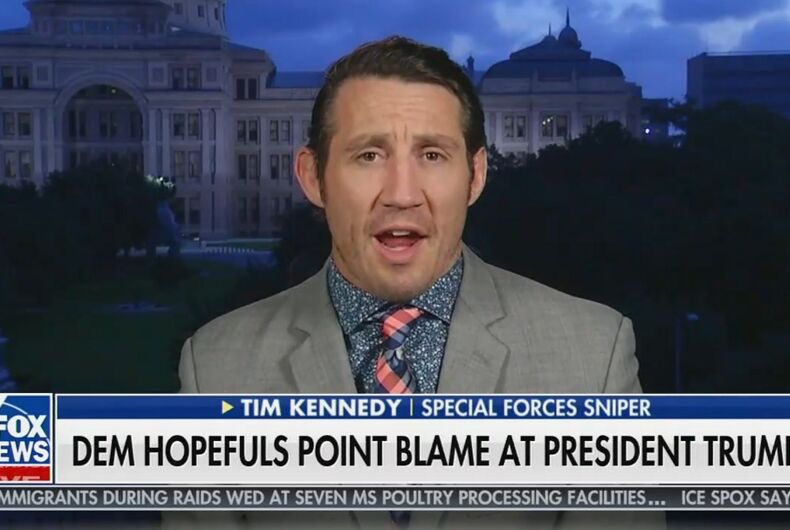 A Fox News guest blamed mass shootings on a lack of masculinity in America, which he said was caused by Ritalin and not enough tree-climbing in schools.

Former UFC fighter and Army sniper Tim Kennedy appeared on Fox & Friends to discuss mass shootings and to generally draw attention away from their very obvious causes, most notably how just about anybody can buy weapons with no other purpose than to mow down as many people as possible as quickly as possible.

Kennedy had posted on Instagram about how men “are all warriors on the inside,” and if that violence is suppressed then it comes out “in the most unhealthy ways.”

On Fox & Friends, he elaborated.

Related: This Gillette ad takes on toxic masculinity. Of course the right lost its mind.

“Everyone is made different but men have to be men. And boys grow up to be men and you have to allow them to do that. When you don’t – when you like give them ADHD medications, when you tell them they can’t go climb a tree, that they can’t be busy in a classroom – like, these are the results. You have to let boys be boys.”

Kennedy didn’t back up his wild assertions (Are people with untreated ADHD less likely to become mass shooters than those whose ADHD is treated? Mass shootings have spiked in the last decade in the U.S., so was tree-climbing during class more acceptable in the 1990’s than today?), but that wasn’t the point.

The point was that “men are better than women” is an idea that conservatives love and they’re going to use it to take attention away from the far more obvious causes of mass shootings. And men are the best, according to Kennedy.

Masculinity and untreated ADHD (really, it’s hard to know which he’s referring to at this point in the segment) “got us to the moon. That defeated the communists. That stopped the fascists and the real Nazis in Normandy. Those weren’t little boys and girls that were storming beaches, those were men. Men that met a call.”

He did not explain why, if masculinity is about fighting communism, fascism, and Nazism, many of those communists, fascists, and Nazis were men.

A good part of Kennedy’s ramblings are about how great he turned out even though his ADHD was never treated, but here he is talking nonsense on Fox & Friends, so maybe he’s not the best example of the great things men can achieve.

Equinox & SoulCycle are scrambling to defend themselves from a gay boycott