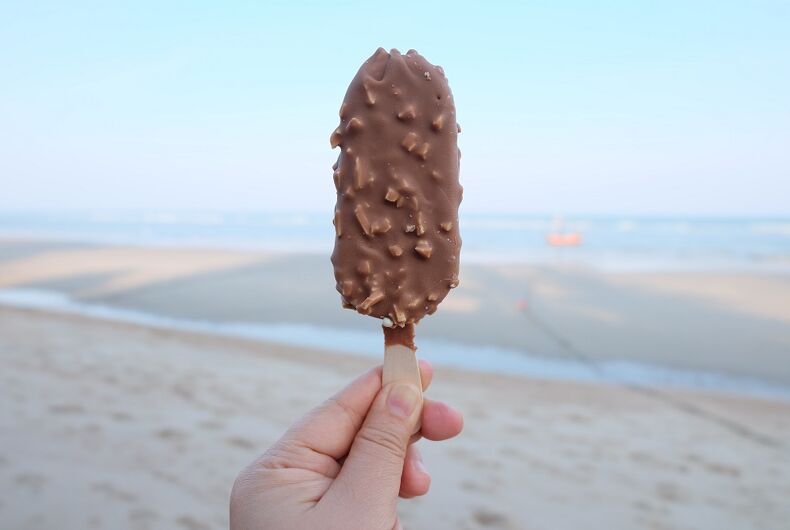 A new ad for ice cream suggests that being gay is a “guilty pleasure” and compares the fear of being gay in societies where homosexuality is illegal to eating ice cream.

A Spotify ad for Magnum – those ice cream pops covered in chocolate, among other things – is about guilty pleasures.

One man who speaks English with an accent says, “A hug for my boyfriend — that’s my guilty pleasure, because in my country, just a simple hug with the man I love could send me to prison for more than 10 years.”

The man’s country is not identified in the ad.

Related: A lesbian couple will appear in this ad, even though the company got hate mail

People on Twitter were not amused by the comparison.

Just heard an ad that (in short) was a guy saying "My guilty pleasure is a kiss. I like kissing men. Kissing men can send me to prison for 14 years in my country. Pleasure should never be guilty. Like Magnum ice cream" NOPE. NOT THE SAME MY DUDES.

An ad for #Magnum ice cream bars just popped up on my #Spotify and it is the cringiest/funniest gay baiting ad ever. A foreign accented man laments how dangerous it is to hug his boyfriend in his country, but he won't get arrested for eating a Magnum! pic.twitter.com/S6WdzW9p51

I know most of y'all probs have Spotify premium so don't hear the ads, but really unsure about the Magnum ad that's talking about homosexuality being a "guilty pleasure" in countries where homosexuality is illegal, like thanks for the awareness but also like not okay

What the hell?!? There are at least 3 versions of the magnum ice cream ad that does a bit about being gay would get me X years in prison followed by a get a magnum, pleasure should be guilty. That's fucked. pic.twitter.com/T0j6Hbxl4g

@MagnumIceCream your advert comparing the potential to be killed if you're gay to the guilty pleasure of eating a magnum is disgusting, racist and homophobic. Please withdraw it immediately.

Magnum defended the ad in a statement, saying that the point was “to remind people that what is considered a guilty pleasure isn’t always what you would expect.”

They didn’t explain why anyone should feel guilty about being gay.

Being gay is illegal in 70 countries and 11 currently allow the death penalty as a punishment for homosexuality.

Bus driver refuses to operate vehicle that ‘promotes homosexuality.’ Now he’s not working at all.