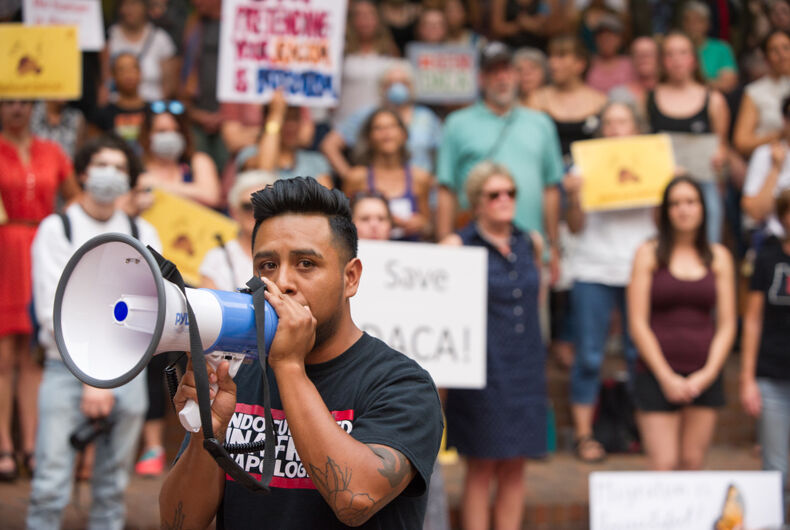 The campaign of Donald J. Trump — leading to his election in November 2016, his takeover of the Oval Office, and up to the current moment — has let the world witness what many of us have understood most of our lives about the unmet foundational promises and premises of a core U.S. national identity.

In his blatant attempts to divide us further, Trump has highlighted the extent to which we already sit divided under systems of patriarchal white Christian nationalism.

In his every day and seemingly endless and extreme expressions of misogyny, racism, ethnocentrism, nativist xenophobia, homophobia, transgender oppression (cis-sexism), Islamophobia, antisemitism and ableism, he has clearly and defiantly demonstrated how all the various forms of oppression – all the separate spokes comprising the oppression wheel – are intersected and inextricably linked.

In his demonstrations of a narcissistic personality, he proves to us in his own perverse way the destructive nature of the cult of rugged individualism on which our country is based.

So rather than continuing to see the nation’s glass as being 90% empty since the ascendancy of Donald J. Trump, I choose to witness a glass 10% filled with the other 90% providing us a glance at understanding, diagnosing and relieving the emptiness representing the massive disconnect between the reality and the promise of this experiment we call the United States of America.

The election of Donald J. Trump did not happen by accident. It was not a simple coincidence or a flaw in Hillary Clinton’s campaign strategy in not devoting enough attention to the voters in Wisconsin, Michigan and Pennsylvania.

It is a path guided by brightly illuminated signs along the way guaranteeing us unlimited and exhilarated freedom and liberty with each successive step in that direction.

Radiant placards flash out at us that “You are Independent,” that “You Can Only Rely on Yourself,” that “Connections and a Sense of Community are Secondary,” that “Our Kind Is Best,” that “Others Are Not Important,” that “The United States Is Extraordinary,” that “Our Country Is Paramount,” that “Bias Against Me and My Kind Are Most Important to Tackle,” that “I Need Not Concern Myself with Bias Against My Neighbor,” and that “I Can’t Get Involved.”

The election of Donald J. Trump has revealed the fallacy of these lighted signs and of the path we’ve been following as individuals and as a nation. His election validated the reality that each person, each individual, needs connections, a sense of community, and a sense of belonging not only with those who are most like us, but also with people who appear different and separate.

The massive outpouring of resistance to Trump and his administration’s toxic policies has begun to fill the remaining 90% of our communal glass as more of us have become conscious of the need to tackle the conditions that brought us to this point.

Yes, the election of Donald J. Trump exposed the enormity of the problems we’ve long experienced regarding the great gap between the promise and the realities of the U.S.-American vision.

But great democracies do not die by invading armies from without, but rather by rot and decay caused by fear and divisions from within. As national immune systems fail, opportunistic infections overwhelm the body politic.

Trump has always been a symptom but not the disease. To put it another way, if Donald Trump had not come our way, another snake oil salesman posing as a physician with no credentials or training would’ve entered to peddle compelling and miraculous bromides to relieve our ailments and cure a disease they do not understand.

Like many types of symptoms, under direct and intensive examinations, we can diagnose the disease. Following this, we can either collectively tackle the disease or choose continually to suffer its effects and die.

The remedy will consist of more than merely changing administrations. It will require becoming truly active in our democracy, remaining forever vigilant, setting a different path and remaining steadfast to stay on course undeterred by bright flashing neon distractions announcing shortcuts that’ll inevitably take us through quicksand that undermines our national values.

We The People can serve as an antidote to a sociopathic and unqualified president by engaging, learning and studying the issues, joining in coalitions to counter all the hate, scapegoating and division.

The election of Donald J. Trump has sparked young people and others previously uninvolved into activism to engage in ways not seen since the 1960s.

They are leading the way toward the destination of real equality of opportunity within our country and between nations, on issues of true inclusive diversity in thought and background, on sustainability of resources and planetary species, on greater parity in lowering the vast gap between the haves and the rest of us by questioning, “How much is enough and how much is too much?”

They are showing us how to value our differences while realizing our similarities. And they are leading us on a new path to fill the glass significantly past the 10% point to well over the brim, making real Randy Newman’s lyrics,