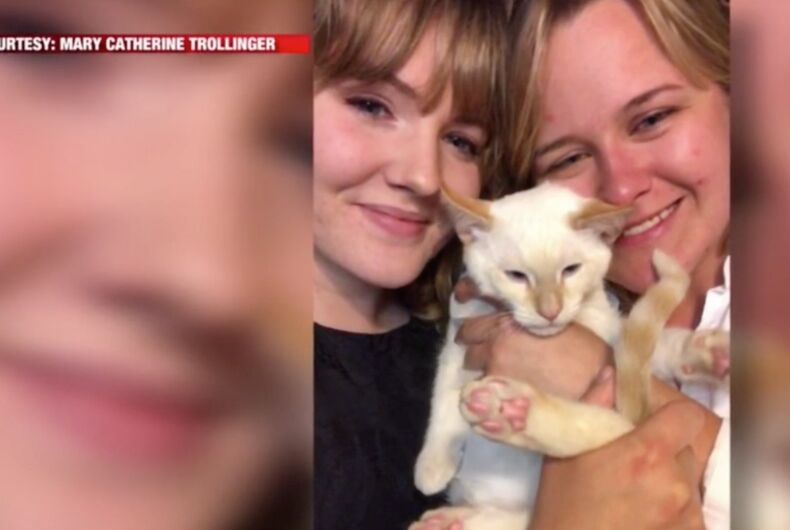 Mary Catherine Trollinger met her wife, Olivia, at church. But instead of celebrating the union, the church threw them out –  and her religious family disowned her. Now, a year later, the hard-hearted pastor has sent her an insulting letter to commemorate the painful anniversary.

“So not only did my mom say you can’t live here, but my church said you can’t go here and it was in the same day, so I was pretty heartbroken was in a deep depression for a few months there,” she told Local 24 News.

Barry Baker, the pastor of Gracewood Baptist Church in Southaven, Mississippi, was not feeling the love when he sent a note to Mary Catherine to remind her that the church loves her “too much” to stop insulting her and denigrating her relationship.

“It’s been about a year now since you left your church family to live an unbiblical lifestyle with Olivia Jennings. At the outset, I kindly, but firmly reminded both of you that a homosexual relationship is forbidden in Scripture and against God’s original design,” Baker wrote.

“For a professing Christian to live openly and unremorsefully in sin is degrading to the name of Christ, defiling to his/her church family, and destructive to himself/herself. I told you that the church could not allow you to live in unrepentant disobedience without addressing it,” he continued.

“We love you too much to neglect you.”

The letter went on to say the congregation’s leaders had held a special meeting after they found out the women had become married after being thrown out of the church and unanimously decide to officially revoke their membership. Since the couple had already been told not to come back, the cruel letter served no purpose other than to denigrate the women.

“It’s one thing if you send out a letter that’s generic, just a template, but it’s another thing to personalize the letter. In that sense, all the things that were said it wasn’t out of love, it was more out of spite,” Olivia told the station.

Trollinger posted a copy of the letter to social media with the caption, “Hmmmmm, ok whatever. Going to a better church now. Love my wife and Christ! ‘Nough said…”

Hmmmmm, ok whatever. Going to a better church now. Love my wife and Christ! 'Nough said…