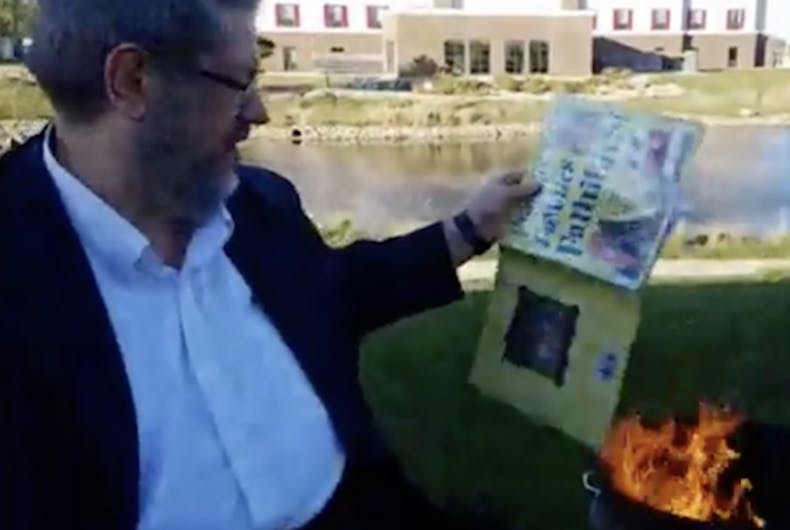 Paul Dorr, the Iowa man who checked out four LGBTQ-themed books at a local library and then burned them, has been sentenced to a small fine for his crime. What’s worse, he says he has no remorse about doing it.

Dorr, who filmed the destruction and broadcast it live on social media, will pay a fee so small, it’s less than some folks have paid in late fees. The amount of the fine would not pay the full cost to replace the four books at retail price.

The radical Christian activist was sentenced to a $35 fine plus a 35% surcharge for court costs and as a penalty. He will serve no time in jail, despite facing up to 30 days in the slammer.

Prosecutors sought the maximum fine of $625 for Dorr’s literary destruction crusade as the shocking crime made national headlines.

Related: First they burn the books. Then they kill people. History has shown us this repeatedly.

The anti-abortion zealot represented himself and refused to testify, but after he was sentenced he released a brief statement to the media, saying he burned the books to exercise his “freedom of speech and faith.”

“My motive was to honor the Triune God in whom my faith resides and to protect the children of Orange City from being seduced into a life of sin and misery,” Dorr said in his statement.

The ACLU, probably best known for their vigilant defense of free speech rights, condemned Dorr’s actions and the decision, saying the First Amendment doesn’t apply to burning books you don’t own.

“Burning public library books is the destruction of ideas, and that’s reprehensible,” Legal Director Rita Bettis Austen told Iowa Public Radio. “The destruction of books from a public library is a clear attempt to shut down the open sharing and discussion of ideas. No one person or even group should decide that they are the gatekeepers of ideas for the rest of the public.”