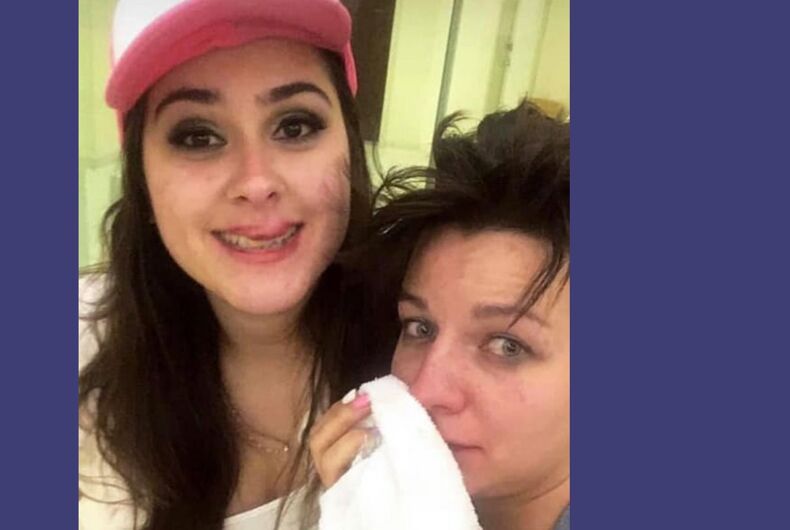 A lesbian couple was beaten during their city’s Pride weekend after they refused two men’s advances. Katya Sazanova, 29, and her girlfriend Ana Camboim, 26, were walking home in Amsterdam at 5 a.m. holding hands.

“People sometimes look up when we hold hands, but people have never been physical,” Sazanova told Het Parool.

Two men on a scooter approached them and one shouted, “Oh, you are so hot, can we join you?”

“Go away, keep driving,” Camboim replied. That’s when the men allegedly attacked them.

“It was so frightening,” Sazanova said. “We only cried at home.”

Both ended up bruises on their faces, swelling in their noses, and Camboim had a busted lip. They reported the attack to police and were told that it might be difficult to find the perpetrators.

“It was dark, they had a black scooter, and we did not remember the license plate,” Sazanova said. “We really didn’t think about that at the time.”

A spokesperson for the police said that they are reviewing nearby surveillance footage and looking for clues, saying that it’s “premature” to say that the attackers won’t be found.

Both women are immigrants to the Netherlands, and Sazanova said that she was surprised to be the victim of a homophobic hate crime in Amsterdam.

“My girlfriend is from Brazil and I from Kazakhstan,” she said. “We might expect something like this in our own country but not in Amsterdam. And then it also happens during Pride.”

“People sometimes ask: why do you celebrate Pride? Why is it necessary to talk about it? For this. What happened to us can happen to any couple. It is still happening, also in Amsterdam.”

Police say this trans woman’s murder wasn’t a hate crime. Her mom’s not buying it.