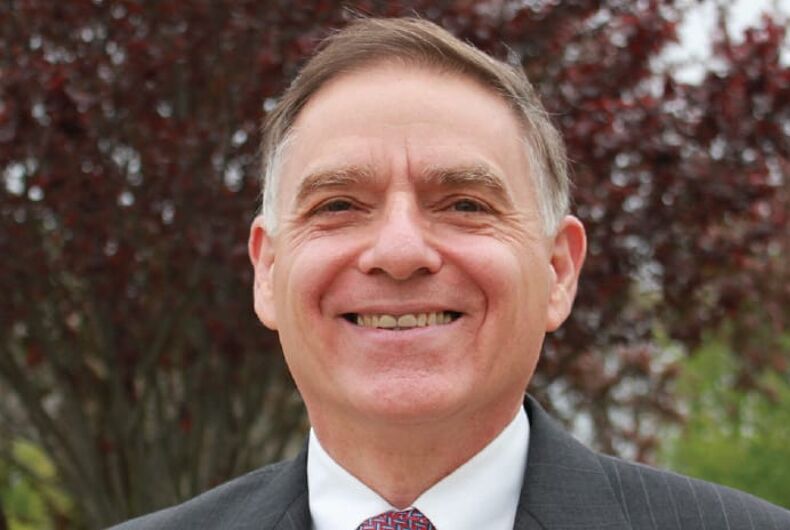 A Jersey Shore mayor is on an unholy crusade to keep positive images of LGBT people out of public schools.

In January, Democratic New Jersey Gov. Phil Murphy signed a bill into law mandating that middle and high school curriculums include the historical contributions made by people with disabilities or who those who are gay, lesbian, bisexual and transgender.

Alfonso Cirulli, the Republican mayor of Barnegat, New Jersey, has freaked out about this and launched a campaign to stop it. He’s trying to create public pressure to force the legislature and governor to reverse their wise decision.

The malignant mayor told The Jersey Shore Online: “Sometimes laws are introduced with the best intentions but sometimes they go overboard…from my observation, we’ve crossed over the line into absurdity.”

First, there is nothing absurd about teaching the truth and giving credit to LGBT people who have helped improve this country from the very beginning.

What Cirulli is doing is unseemly. He is demanding that the government lie to students about reality. He is insisting that we build a giant closet that renders LGBT people invisible. The mayor wants to hide LGBT heroes that have given far more to this country than he has.

What he’s not saying is that if LGBT people are hidden, it’s much simpler for bigots like Cirulli to ostracize and discriminate against them.

You know what crosses over the line into absurdity? Cirulli’s ridiculous reason for opposing the LGBT curriculum. He said, “The government has no right to teach our kids morality.”

Then he immediately and ironically turned around and incoherently said that the LGBTQ political movement was “an affront to almighty God with the intent of trying to completely eradicate God’s law. The Bible tells us that they will try but not succeed, and pay the eternal price for their rebellion.”

So the mayor doesn’t have a problem with teaching morality – as long as it’s his backwater version of morality. No hypocrisy or disconnect from reality here.

Finally, the mayor said, “There is no hate or bigotry intended here. But no group has a right to force others to comply with their beliefs.”

Again, Cirulli is trying to ram his own personal sectarian beliefs down the throats of all New Jersey residents. And, yes, Mr. Mayor, trying to erase the contributions of an entire community is the very definition of bigotry.

In electing to go down this path, the small minded, small town mayor has chosen ignorance over information and indoctrination over education. He has embarrassed and humiliated Barnegat, New Jersey. He has made a place most people have never heard of seem intolerant and unwelcoming.

For what he has done to his constituents and the reputation of his town, Cirulli ought to resign.

Worst of all, the mayor is a former assistant principal – so who knows how many students he harmed with his backward, homophobic attitude over the years. How much bullying of LGBT students did he allow to take place during his tenure? How many lives is he responsible for ruining? We may never know.

It’s 2019 and it’s past time to leave this medieval mindset behind. Teaching the important contributions of LGBT people in world history will not turn a single kid gay.

However, denying students incontrovertible facts about LGBT people, could turn these kids into hateful bigots – and I submit that’s the real goal of Mayor Alfonso Cirulli.

‘Straight Pride’ organizer has a gay son. She says it’s ‘typical’ for gays to hate their parents.