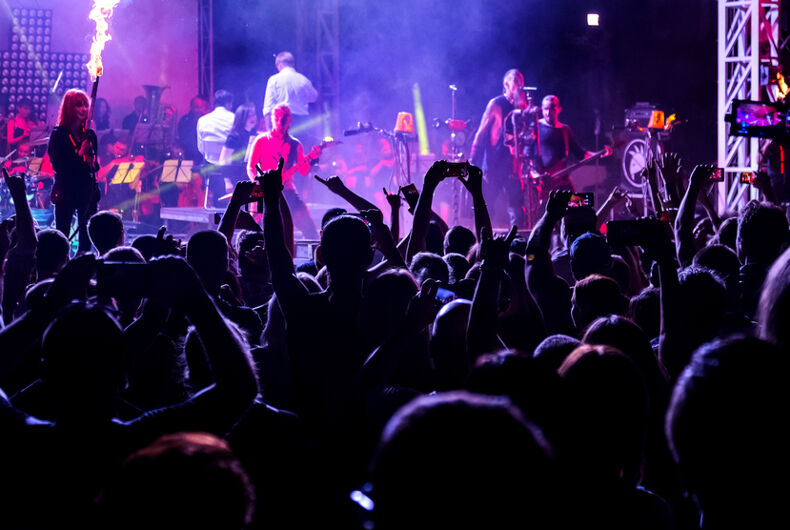 Landers and Kruspe, covered in sweat, were preforming a guitar duo at the end of the song when they approached each other, smiled, and then briefly kissed while the crowd cheered them on.

The band also shared the moment on their official Instagram page, saying “Russia, we love you!”

The law was passed in 2013, and bans the “promotion of homosexuality to minors.” It has led to a dramatic increase of violence against LGBTQ people in Russia, including the recent murder of activist Yelena Grigoryeva. Grigoryeva had been listed on a Russian website that offered prizes for “hunting” and killing LGBTQ people and allies.

The first arrest made under the law was that of a Russian teenager, Maxim Neverov. He won on appeal against the government after he was arrested for sharing photos of shirtless men on the Russian social media network VKontakte.

The law has also been used against those visiting the country, with visitors potentially imprisoned for 15 days, fined 5,000 rubles, and deported. It is unknown at this time if the band could face such charges.

Rammstein formed in 1994, performing a uniquely German form of heavy metal known as German Neue Deutsche Härte. The band has become known for intense live performances featuring extensive use of pyrotechnics. “Ausländer” is their third and current single from their untitled seventh album.

This is not the first time the band showed their support for LGBTQ people. While performing in Poland, Rammstein’s front man, Till Lindemann waved a pride flag while crowd surfing.  Poland has been considering a similar law to Russia’s.

While the band member’s smooch made worldwide news, Russia’s state-run media completely ignored it, instead telling readers that the band said they loved Russia on Instagram – while ignoring the photo that went with it.