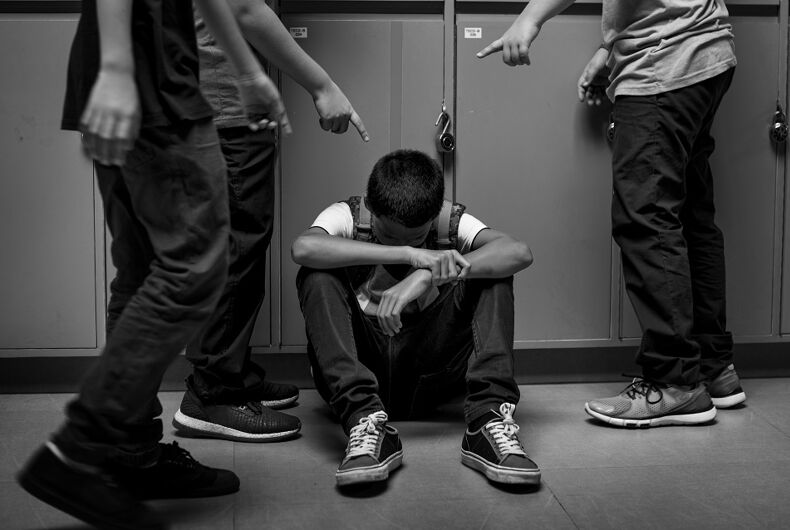 A gay teen at a rural Indiana high school was attacked in the locker room by a group of boys while another student recorded the incident. The video of the brutal attack was shared with other students at the school and someone texted it to his mother.

The victim is a student at Alexandria Monroe High School. He said that he had gotten dressed after gym class on Tuesday when another boy started staring at him.

“The guy who attacked me was standing next to my locker and wouldn’t stop staring at me, so I had a weird feeling that something was about to happen,” he said.

Then the kid pushed him.

Related: A gay teen who was brutally bullied for years stabbed one of his attackers. He’s going to prison.

“He kept pushing me, but then he stopped pushing me and everything got quiet, so I thought he walked out,” the victim told WTHR.

But the attacker didn’t leave – he started punching.

“I felt him punch me a couple more times and I got hit my face on the mirror and then he punched me in the head twice. It happened so fast. I can remember them holding me against the wall.”

Two other students then held him so that the first one could punch him. They stopped when another student intervened.

The victim was left with a broken nose and had to be taken to the hospital for treatment. He also missed a day of school after the attack.

He said that the attack came after years of verbal abuse from the attackers.

“I’ve gotten so used to it over the years that it doesn’t phase me much,” he said.

District officials said that they are investigating the attack with local police. They say they were unaware of the incident until

The victim returned to school on Thursday.

“I just tell myself to forget what happened and try to act like it never happened,” he said.