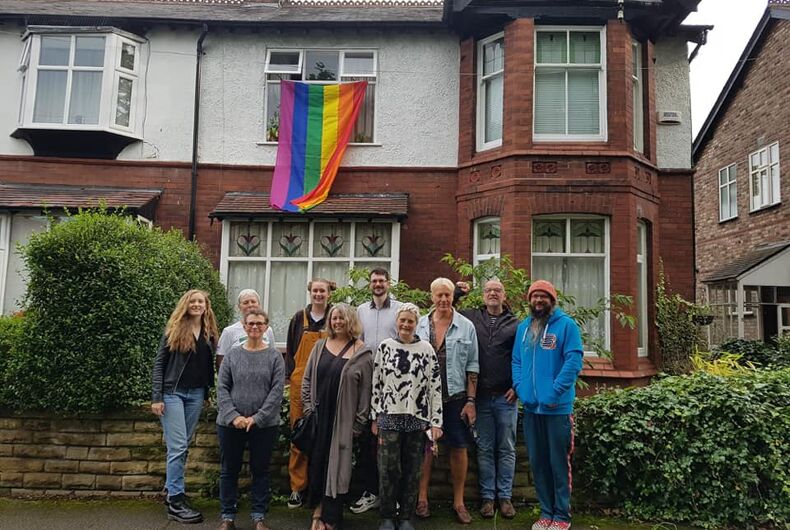 Neighbors are flying rainbow flags outside their houses to show solidarity with a gay man who was harassed for flying one.

Just hours after hanging the flag, several men shouted homophobic insults at him from the street.

“I was going to see my partner in Stockport and I was just putting some things in my car,” he said. “These two lads walked past my house. Once they’d got further down the street they started verbally attacking me.”

“They were calling me a fucking batty boy, a cock sucker, a poof, shouting all this really vile abuse.”

He asked them to stop, and one of the men threatened to kill him. They eventually walked away.

Hancock shared the experience on Facebook and emailed neighbors. A few days later, his neighbors had hung over 30 rainbow flags in solidarity with him.

“Everyone has just been really supportive from the start,” he told Metro.

“It started with one of my neighbors, Liz [Sharpley], who responded to the original email letting them know what had happened.

“She was acting in solidarity and was putting up a flag anyway and said she would put in an order for some more flags and it just spiraled from there. The community is just very accepting, open and diverse and they wanted to put two fingers up to the haters.”

He said that the support showed him that LGBTQ people are not alone.

“Everyone should know they are not alone. Even if they are living in an area where they might not feel as accepted, they should know that there are people out there like them and people who support their right to be who they want to be.”