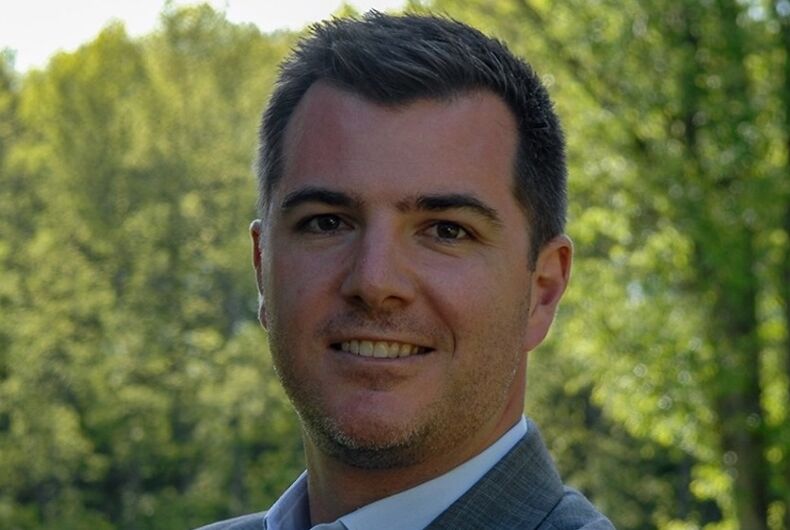 Justin Carroll — a candidate running to serve as the first ever out gay Town Justice of Clinton, New York — was targeted this week by a homophobic flier published on the Facebook page of Hudson Valley News. The image of the flier has since been removed.

Related: Thanks to his racist dogwhistles, Trump is the Democrats’ best fundraiser

The amateurish flier stated that it had been issued by local Democrats on Carroll’s behalf. It had the word Pride written in rainbow-colored script, a 2005 picture of a Carroll bearing his shirtless torso and highlighted Caroll’s work with youth at the YMCA. It also mentioned The Victory Fund, an organization supporting LGBTQ political candidates nationwide.

The juxtaposition of Carroll shirtless alongside his working with kids at the YMCA is a none-too-subtle dogwhistle insinuating sexual impropriety with children, an ages-old anti-gay trope.

In a statement Carroll said:

“This type of hateful, divisive campaign has no place in our community, and I know that Clinton is full of good people who won’t stand for it.”

To be clear, and despite the anonymous author’s insinuations to the contrary in the flyer, I am proud to be a nationally recognized attorney, a committed volunteer at the YMCA, and a member of the LGBTQ community along with my husband of three years.”

“I plan to win this election on my merits and refuse to be baited into a tired debate with anonymous internet trolls about the person I chose to marry.”

Clinton area Democrats have publicly called on Republican candidates and the local GOP Party to disavow and denounce these types of negative, divisive campaign attacks. In a statement, Sam Moyer, Chair of the Clinton Democrats, said:

“Everyone elected to office swears an oath to uphold the principle of equality for all under our Constitution, and each one of our town candidates should forcefully and unequivocally denounce these types of nasty attacks aimed at sowing division in Clinton and demonizing the LGBTQ community. We’re calling on Justice Brands – and all of the candidates running for office in Clinton from both parties – to do the right thing and disavow and denounce this kind of dirty campaign tactic.”

Clinton County is located on the northeast corner of New York state. In the 2018 U.S. Presidential election, the county’s voters chose Hilary Clinton over Donald Trump 46.9 percent to 45 percent.

Is Pete Buttigieg counting on a brokered convention to win the Democratic nomination?