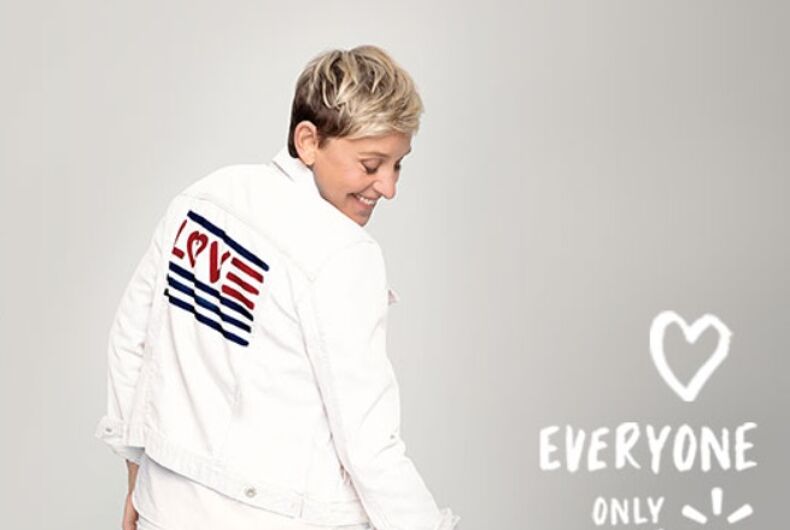 Ellen wearing an EV1 jacket, without the design in question.

Ellen Degeneres is getting sued by a street artist for copyright infringement. Last week, street artist Julian Rivera filed suit against both Walmart and Ellen, alleging that they stole a design from his art.

Rivera uses a design in his work that’s the word “love” written to look like a dripping heart. The l, v, and e are connected in the design with an “o” added to make it a word.

The design appears on his art as a signature of sorts and on products that he sells on his online store.

Related: You can now dress your baby in clothes designed by Ellen

Ellen’s EV1 clothing line – available from Walmart – uses a similar heart design on some of the products. The word “love” is written out as a heart, with the l, v, and e attached and an “o” drawn in – sans dripping on the heart itself.

Rivera’s lawsuit calls the design in EV1 “a slavish copy” of his work.

But he isn’t just saying that he wasn’t compensated for an idea he came up with. Rivera is arguing that his work has been diminished by being associated with the likes of Walmart.

“Nothing is more antithetical to a street artist’s credibility than association with mass-market consumerism—of which Walmart is the epitome,” his complaint reads. “People who recognized his design in the EV1 Collection would have concluded that Rivera ‘sold out,’ diminishing the value of his work and reputation.”

Rivera is seeking monetary damages and for Walmart to pull the EV1 products that have the design on them.

Walmart, for its part, says that it came up with the design independently. The design isn’t that creative in the first place, Walmart argued in a response, so it’s not really surprising that one of their designers came up with something that looks similar.

Copyright infringement cases are based on a lot more than just whether two designs look similar or two songs sound similar. Whether one party had the opportunity to steal another’s work, as well as how unique one party’s work is when understood in the context of its genre, are important questions that the court will have to answer.