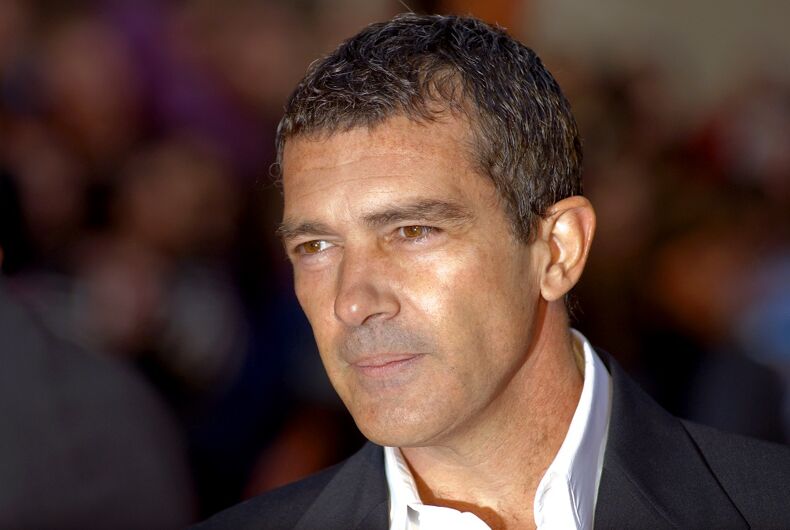 Antonio Banderas told a story about how a drag queen saved his life.

He said that it happened in 1976, when he would have been around 16-years-old. He was riding his motorcycle and he ran into a ditch.

“And the front wheel of my motorbike went into a ditch and, boom! I hit a car and my head hit the tank,” he told the Independent.

He also got his calf pierced by the kickstand. But a drag queen who was on the corner “came from nowhere” and helped him.

She “got in the middle of the road and stopped a car to take me to hospital.”

According to Independent Patrick H.J. Smith, Banderas pulled up his pant leg to show the scar he still had.

“The kick stand got me here. Blood everywhere. You could see the bone.”

The interview was to promote the new movie he’s appearing in, Pedro Almodovar’s Pain and Glory, where he plays a gay man.

Banderas has played quite a few gay roles in his career, including Law of Desire in 1987 and Philadelphia in 1993.

“I’ve played gay characters for a long time and have always tried to be very respectful to the gay community,” he said.

“I’m an actor. I just play the character and try to believe them completely when I’m doing them. I try not to perform them; I try to live them.”

“But, you know, I’m not Zorro, either. I have never been heroic. I run away!”

This couple used to run a conversion therapy camp. Now they’ve been charged with human trafficking.