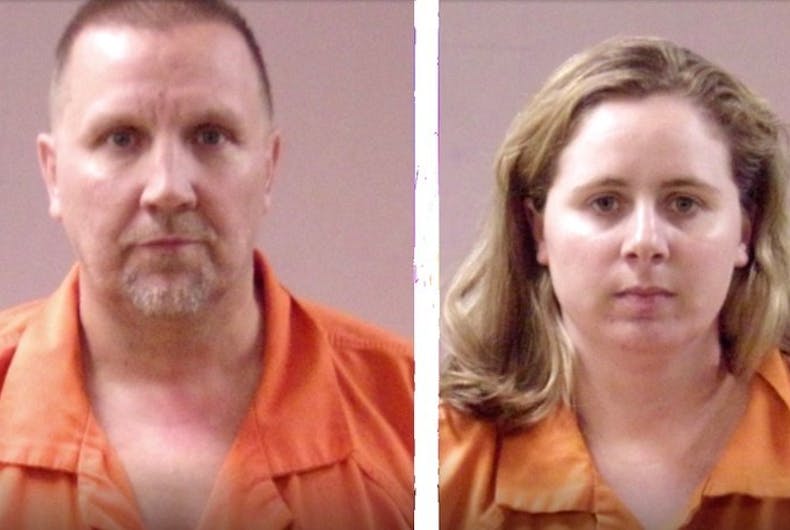 The former operators of a conversion therapy camp have been indicted on a number of charges related to alleged abuse, including human trafficking and forced labor.

Gary and Meghann Wiggins are accused of forcing at least four boys at their home for troubled youth in Texas to work for them in their businesses and abusing and neglecting them.

Gary Wiggins, 49, had previously run a conversion therapy camp in Alabama for boys. Several of the boys ran away from that home and accused him of denying them food and putting them in solitary confinement as punishment.

“I’m going to get the demon out of you and make you straight,” Wiggins told the boys, according to Lucas Greenfield, one of the survivors of the conversion therapy camp.

Greenfield said that Wiggins “took off his belt and started swinging” in order to beat the gay out of him.

The camp appeared in a 20/20 segment on conversion therapy, and another teen sent there said that “Brother Gary” would use epithets like “faggot” and “queer” as he tried to make the kids straight. In the segment, Wiggins claimed to have an 80% success rate when it comes to turning teen boys straight.

Authorities in that state had looked into Wiggins’ camp, but no charges were filed. Through his lawyer, Wiggins said that he always got permission from parents before beating the boys.

Since then, he has been running the Joshua Home in Texas for troubled boys. Local media reports have not mentioned the sexual orientation of the boys who were in his care. He and his wife also own several businesses: Joshua Home Moving and Joshua Home Lawn Care.

Last year, police got a warrant for the Joshua Home and for the businesses. The evidence they found led them to remove the eight boys between the ages of 10 and 17 in the Wiggins’ care.

Now a grand jury has indicted them on Trafficking of Persons charges, accusing the couple of forcing four of the boys to work in their businesses.

Nicholas Nasiatka, 11, was one of the alleged victims of the Wiggins, and his older brother Andrew is speaking out.

“My brother did a lot of work around the grounds and helped around,” he told KXAN. “There was certain disciplinary measures such as staring at the wall.”

He used to be a Baptist and said that since he left the faith he has been thinking critically about what his brother went through.

Before the grand jury indictment, the Wiggins’ attorney Eddie Shell said that none of the accusations made by the boys removed from their care warrant charges.

“The parents of all of the boys have always been informed of the condition of the boys and the whereabouts of the boys,” he said. “Anything that the Wiggins’ have done, they have done it with the permission of the parents.”

“I’m glad the children are out of it, and I’m glad we’ve progressed to where we have, sometimes it’s frustrating because these cases take so long,” said Burnet County Sheriff Calvin Boyd.