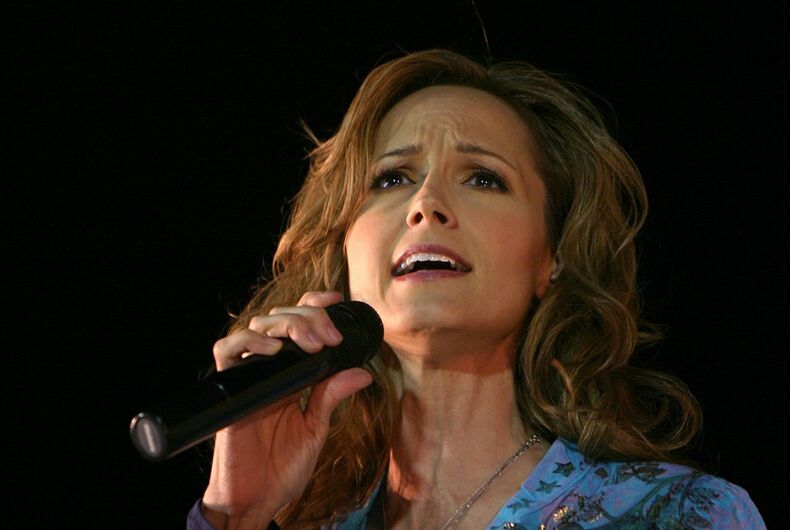 Out country music star Chely Wright was invited back to the Grand Ole Opry for the first time since coming out.

Earlier this month, Wright took the stage in Nashville. She sang her 1999 hit “Single White Female” but changed a line to “A single white female, looking for a girl like you,” as well as “Shut Up and Drive.”

She first played the Opry 30 years ago. “And as I walked offstage, full house, flashbulbs were going off, I thought to myself, ‘If I never get to do anything else again, if I never make it in Nashville, I just played the Grand Ole Opry,'” she told the audience this month.

Wright would go on to play the Opry for years, doing shows every time she was in Nashville, performing with legendary country music legends.

She was a favorite with other musicians and fans alike. Until she came out in 2010.

“So after I came out, just not being back here I guess I’ve always kind of felt like a part of me was extinguished,” she told Rolling Stone.

She said that she didn’t want to call out the Opry because she loved playing it so much.

“I was never going to say anything pejorative about the Opry, but when the question was asked, ‘Have you been invited back to the Grand Ole Opry?’ all I could say was, ‘No, not yet.'”

She isn’t the first out artist to perform at the Opry, and she said that she’s happy that other out artists were able to play on that stage.

And she’s doing what she can to make more space for other LGBTQ performers.

“I don’t have a lot of sour grapes for people who didn’t speak up; I get it. I hid for 39 years because I was afraid to speak up because I didn’t want to lose fans.”