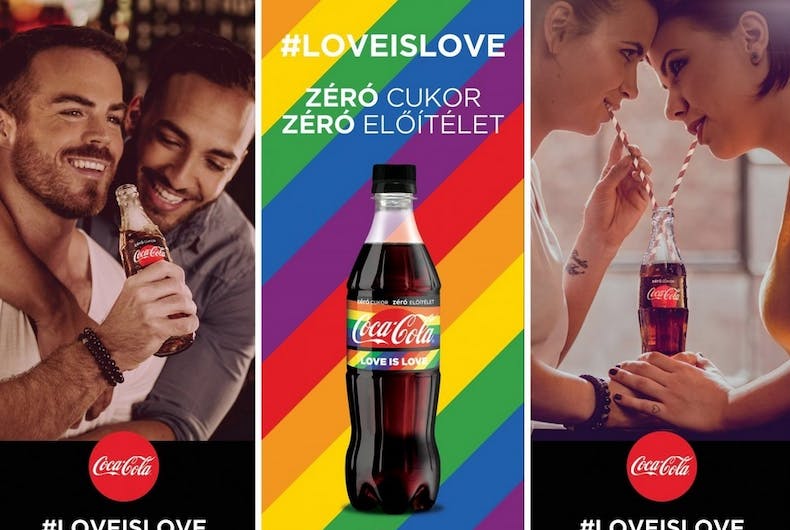 Coca-Cola is defending a series of ads that featured two same-sex couples after it came under attack from the right in Hungary.

By far the most sexual of the three ads is the straight one.

The ads say “Love Revolution” and will appear as posters in Budapest during the Sziget Festival, a music and arts festival.

Related: Donald Trump welcomes one of the world’s most anti-LGBTQ fascists to the White House

István Boldog, a member of the Hungarian parliament and the far-right Fidesz party, spoke out against the ads. He wrote in a post on Facebook that he would not drink Coke until the ads were removed.

A petition was also started that asks the mayor and the public transportation officials to remove the ads from public places, the Budapest Business Journal reports.

But Coke is standing by the ads.

“With this we really want to convey a message: our belief that everyone has the right to affection and love; that the feeling of love is the same.”

“We believe that we are all equal, irrespective of our nationality, religion, gender, age, ethnic background, spoken language, hobbies, and opinions. We believe that both hetero- and homosexuals have the right to love the person who is best for them.”

The Fidesz party itself hasn’t backed Boldog’s call for a boycott. Instead, it released a statement that said, “Hungary is a free country, and so everyone can freely decide whether to drink Coca-Cola.”

Coca-Cola said that it will also release a limited-edition rainbow bottle for the festival.