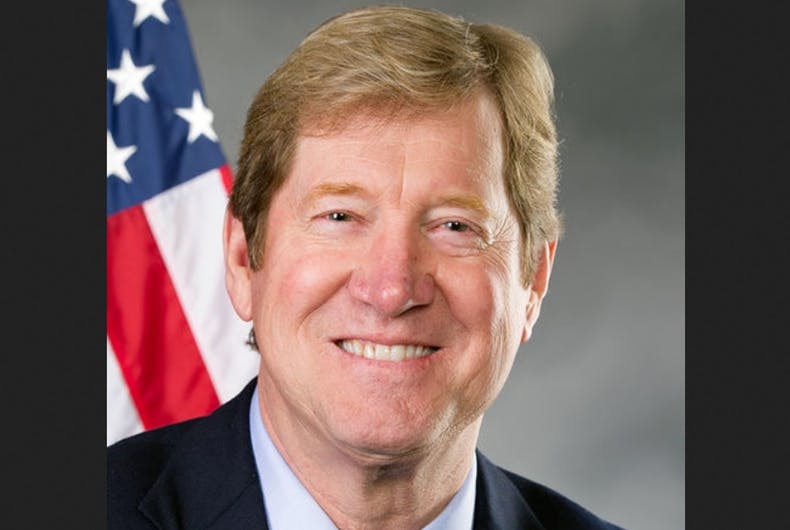 A Republican who once compared gay people to rapists is running for the U.S. Senate. Former Representative Jason Lewis, who lost his reelection campaign to out lesbian Angie Craig in 2018, announced his intent to challenge Senator Tina Smith (D-MN) at the Minnesota State Fair yesterday.

His love of Donald Trump will be central to his campaign. “I have a hard time disagreeing with much of [Trump’s political positions],” he said.

But Lewis is probably better known for some of his outrageous statements. After a failed run for Congress in Colorado in 1990, he became a conservative radio host and a frequent guest host on Rush Limbaugh’s show.

He also said that he believes gay people shouldn’t be allowed to raise children because it “could harm the kid.” In 2012, Lewis whined about how it’s socially unacceptable to call a woman a slut.

Speaking to the Star-Tribune, State Republican Party Chairwoman Jennifer Carnahan said Lewis is “the best chance we’ve had in decades” to win the U.S. Senate race.

“Jason Lewis is a dangerously out-of-touch extremist who compared LGBTQ people to rapists and criminals and complained that he could no longer call women ‘sluts’” said Lindsey Clark of HRC. “Lewis’ views are out of step with Minnesota and he has no business pursuing higher office.”

Smith won a special election in January 2018 after former Senator Al Franken resigned. She has to run for reelection in 2020, which would have been the end of Franken’s term.