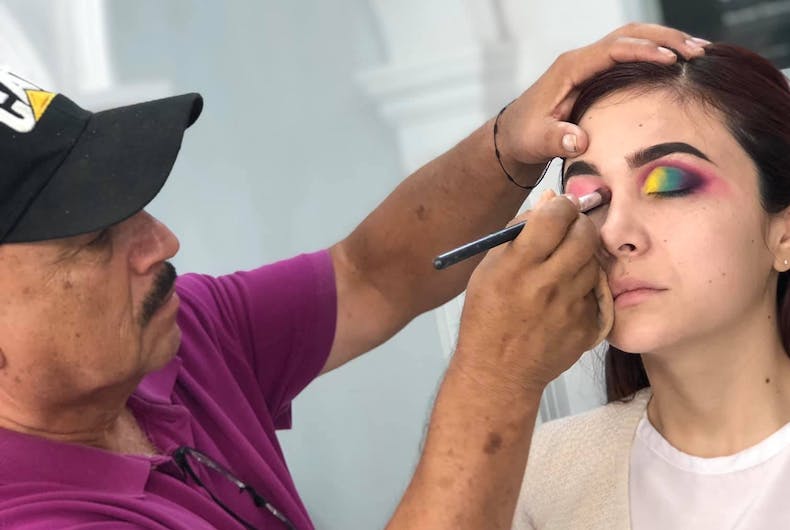 60-year-old Raúl Santiago spent decades behind the wheel of his semi-truck before finding his true calling in life. Now Santiago is hanging up his big wheeler in favor of an eyebrow pencil as he starts his new career as a makeup artist.

“I’m not afraid of challenges,” Santiago told Latin Live. “I throw myself into the water and learn to swim.”

With three daughters, Santiago had plenty of experience with makeup and he started selling a brand of cosmetics to waitresses and cashiers along his route. But what better way to sell more makeup than to learn how to apply it to make a prospective customer look their best?

“Whenever I pass a place, I know I can convince the girls [to buy makeup],” he said. “Within five minutes of chatting, they’ve bought something.”

Related: Someone is trying to sell makeup to men by calling it ‘war paint’

After Santiago learned that artist Deysbel Olachea offered a course in professional makeup artistry, he signed up and blew the class away with his skills. Olachea’s class is normally all female and, while the Arizona man had corresponded with her before enrolling, she admits she was a little surprised when Santiago strolled in wearing a trucker hat.

“I thought he was going to be younger,” Olachea told the outlet.

After spending some time adjusting, Santiago dove right in. While, they welcomed him with open arms. And, the site reports, by the third day he was bragging about his blending abilities.

She kicked off the ‘gender reveal’ party craze, but now she has one big regret