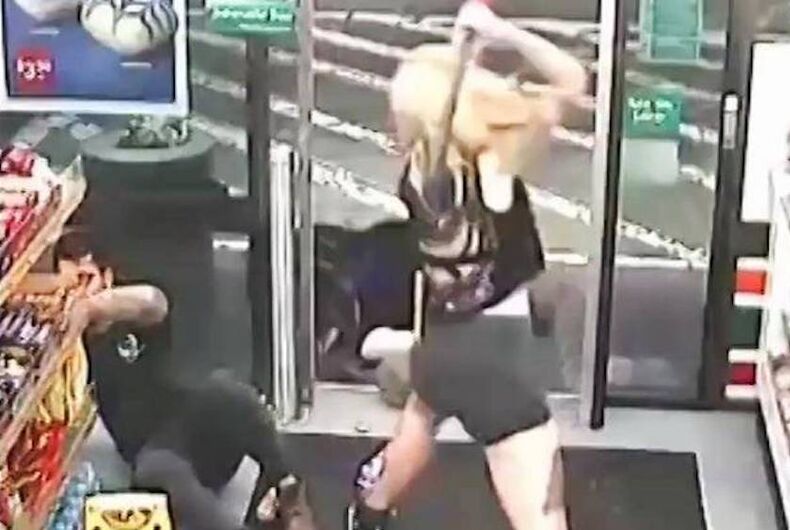 A trans woman in Sydney, Australia named Evie Amati has received a nine-year prison sentence after attacking three strangers with an axe in and near a 7-Eleven convenience store.

Amati reportedly attacked the men after a Tinder date in January 2017. She said her date shamed her for being a trans woman. So she subsequently ingested alcohol and drugs before messaging her date, “One day I’m going to kill a lot of people… For hating something so innocent.” An hour later, she carried out the attack.

Security camera footage showed her walking into a 7-Eleven with an axe and then attacking three people: two men and a woman. Gay Star News recounts Amati’s attack:

Sharon Hacker, struck in the back of the neck, had the potentially fatal-blow softened by her thick dreadlocks.

Amati left the scene. Afterwards, she chased down and attempted to strike a man, Shane Redwood, twice. He used his backpack to block the strike.

Amati received a nine-year prison sentence with possible release in four-and-a-half years. She got this sentence despite the maximum sentence being somewhere between 75 and 20 years. The judge said Amati could’ve received five and seven years in prison for each her assaults.

Amati’s lawyer says her sentence was handed down in light of “special circumstances” (though mental illness wasn’t one of them). The “circumstances” included expressing genuine remorse for her actions (she called them ‘catastrophic’), the fact that she didn’t kill or permanently disable anyone, and the fact that she has since enrolled in a lengthy addiction program.

However, prosecuting barrister Maria Cinque said, “Nine years with a minimum of four-and-a-half years is so manifestly inadequate that it is an affront to the administration of justice.”

U.S. border agents rip children away from immigrants with HIV