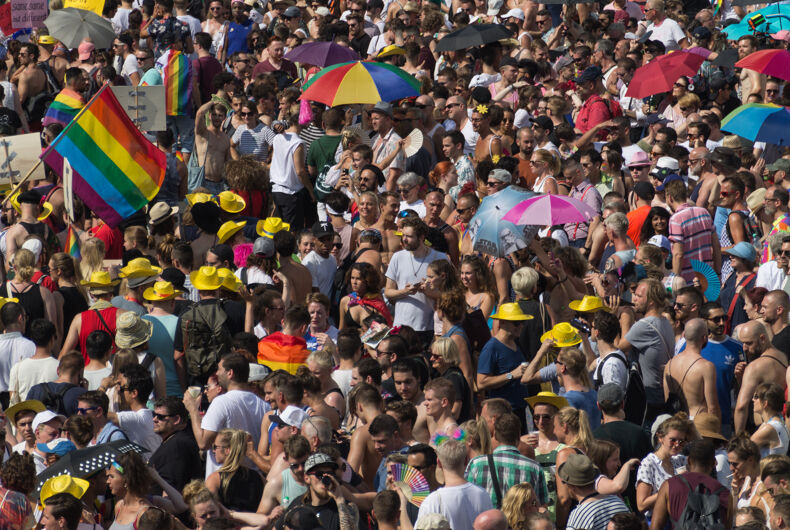 People celebrate at the 2018 Pride Parade in Berlin.Photo: Shutterstock

“I am gay – and that’s a good thing!” said Berlin’s former Mayor Klaus Wowereit prior to the 2001 elections. He is one of several prominent German politicians who are openly gay.

Two of the three main political parties in the German Government are considered socially conservative in regards to queer rights. Despite this, the Berlin Pride Parade that takes place every year aims to celebrate the progress that Germany has made to ensure that the LGBTQ community gains equal rights.

The first Berlin Pride Parade, in 1979, was held in memory of the Stonewall Riots, and was meant to commemorate the first big uprising of LGBTQ advocacy.

Historically, attitudes towards the German LGBTQ community have had highs and lows. Despite same-sex activity being illegal, the queer community was largely accepted in the 1920s, and there were several gay bars and clubs open.

Nazi Germany enforced conservative intolerance for the queer community during World War II, and proceeded to persecute and murder thousands of homosexual German citizens. In 1950, however, same-sex activity was decriminalized, and many people had their charges revoked, if they were previously found guilty of same-sex activity.

Same-sex marriage was also legalized in 2017, and couples have full marital and adoption rights.

A 2017 poll found that 83% of Germany supported same-sex marriage. This was an improvement from the same poll from 2015, in which only 66 per cent of people supported inter-sex marriage.

People who identify as transgender are legally allowed to change their gender without gender affirmation surgery since 1980. The law initially required the individual to undergo surgery, but it was declared unconstitutional.

The German Constitution also prohibits discrimination based on sexual orientation or gender identity under Article 10(2).

Despite this, a 2013 survey by the EU’s Fundamental Rights Agency showed that 46% of the LGBTQ community in Germany had experienced discrimination based on their sexual orientation or gender identity.

The legal changes that have happened over the last 50 years have had a significant impact on the way that the queer community is accepted in their society.

A 2013 study conducted by the Pew Research Center revealed that 87% of Germans believed that homosexuality should be accepted by society. In this poll, Germany placed second highest in the world following Spain.

Today, the Pride Parade in Berlin is one of the largest in the world, attracting over 500 thousand people every year.

Here are some photos from recent Pride Parades in Berlin: