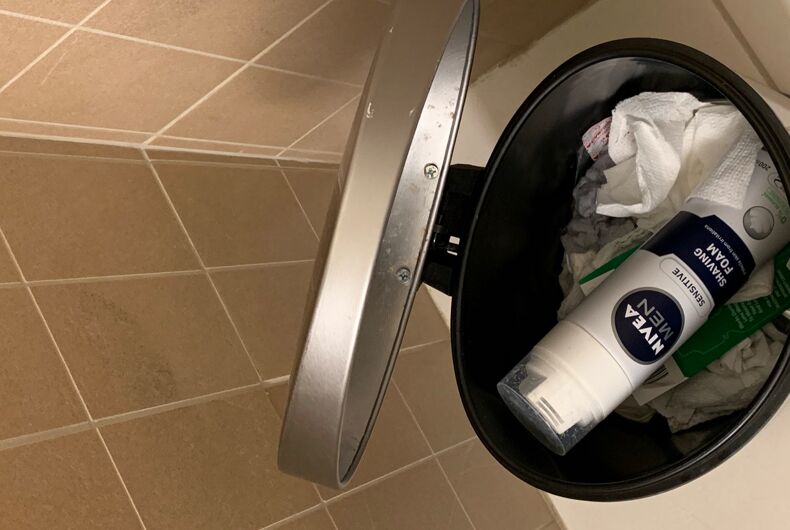 Users are tossing Nivea products in the trash after an executive reportedly made an anti-gay remarkPhoto: Decidocisum/Twitter

Skincare brand Nivea has become embroiled in controversy over supposedly anti-gay remarks an executive made in a meeting with their longtime ad agency, FCB. The agencies that make up the FCB network have worked with the German company for over 100 years according to Ad Age.

The outlet reports that during a phone meeting with FCB representatives, executives rejected a concept that showed two men’s hands touching, with one saying, “We don’t do gay at Nivea.” One member of FCB’s presenting creative team is gay.

In an internal memo, FCB Global CEO Carter Murray did not address the remark, but told employees they would resign from the account when their contract expires at the end of the year.

“There comes a point in every longterm relationship when you reflect on what you’ve accomplished together and set your sails for where your journey will take you next,” Murray wrote in the memo. “Sometimes that journey ahead demands tough choices that lead down different paths.”

“It is my hope that in reflecting on the incredible journey we’ve had with Nivea around the world and in your markets, you take pride in what we accomplished together and come to respect the many difficult factors we had to carefully weigh to take this step.”

Nivea pushed out a statement after the news broke, saying “we don’t comment on unsubstantiated speculations” and touting their nondiscrimination policies.

“We are an international company with more than 20,000 employees with very different genders, ethnicities, orientations, backgrounds and personalities worldwide,” the statement said. “Through our products, we touch millions of consumers around the globe every day. We know and cherish  that individuality and diversity in all regards brings inspiration and creativity to our society and to us as a company.”

In 2013, Barilla Pasta chairman Guido Barilla said the company would never advertise specifically to LGBTQ people, adding “If the gays don’t like it they can go an eat another brand.” After national outcry and boycott threats, Barilla apologized and has started including gay people in commercials and marketing directly to LGBTQ consumers.

The company’s turnaround has been praised for the immediate apology and followup on promises made to quell the community’s anger. Barilla’s profits and consumer level satisfaction levels have soared since.

Nivea, however, has gone dark on social media and has refused to comment any further on the allegation. But as the skincare line continues to keep mum, consumers are starting to speak out.

As with Barilla, they’re providing free publicity for the company – but instead of complimenting the product consumers are spreading the news of the ugly comment even further. And, most importantly, they’re posting pictures of themselves throwing the company’s products in the trash.

A request for comment from the skincare giant was not returned by publication. Imagine that.

After a 100-year long relationship Nivea Crème dropped by ad agency FCB due to homophobic comment “We don’t do #gay at #Nivea” over marketing call @NIVEA_Germany your "strong commitment to diversity" better become actually visible, or I will stop. Ich bin auch deutsch und #schwul pic.twitter.com/sQM0jrjqxR

@NIVEAUSA dont do gay? We dont do nivea. #nivea pic.twitter.com/6weyf9Q9p1

Nivea doesn't do gay? I don't do Nivea. Are you with me? #NOMoreNivea #Nivea pic.twitter.com/7skLfUCkop